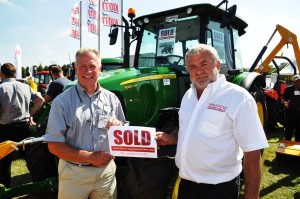 Speedcut Contractors managing director Dick Franklin was buys a new John Deere 5100M from Farol Ltd of Thame to add to their fleet of sportsturf and landscaping machinery.

Dick, who founded Speedcut in 1977, signed the deal with Peter Helps and the Speedcut logo was added to the machine during the show on the Farol stand.

"We have a good relationship with Farol," says Dick, "and this is adding a green machine to our usual fleet of red ones, mainly Massey Fergusons.

"The John Deere was chosen because of its performance and power and we will be using it shortly to complete surface work and seeding at Northwick Park, Harrow, for Brent Council."

The pitches, in the shadow of Wembley Stadium, are two senior and one youth, constructed during a six-week period in which the Speedcut team have been working on 2.4 hectares of a former multi-use sports ground.

The job involves removing the topsoil, decompacting the subsoil, laser-grading the levels and laying 8,000 metres of primary drainage which will connect to an existing outfall chamber.

"When the topsoil is replaced," says Dick Franklin, "it will be laser-graded to pre-determined levels prior to fertilising and seeding in mid-September - using a Barenbrug BAR 7 ryegrass mix."

Says Guy Champion, group marketing manager for Farol: "We are delighted that Speedcut Contractors have chosen this John Deere from our range and it was good to see Dick Franklin on the stand at Windsor."

This year has been one of the busiest on record for Speedcut with sports pitch construction and golf course projects across the country - including Oxfordshire, Surrey, Essex, Kent, Sussex and Somerset.