Oxford-based Speedcut Contractors have completed a number of major sporting projects and are currently involved in some high-profile work in golf, football, rugby and cricket.

At Sundridge Park Golf Club, Kent, they are reshaping and recontouring tees and bunkers, while at Castle Royal Golf Club in Berkshire they have dredged and lined a large lake.

At Blue Mountain Golf Club in Berkshire, Speedcut reconstructed two tees that were affected by heavy snow last winter while at Chislehurst Golf Club in Kent they have installed green surrounds drainage and Gwazae-aerated half the greens in preparation for the winter. 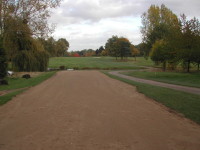 Speedcut's laser-leveller for renovating tees and cricket wickets has been in action at golf and cricket clubs across the country.

Their Gwazae aerator (for relieving areas of compaction) has been heavily used on racecourses, cricket outfields, football and rugby pitches and golf courses. At West Chiltington Golf Club, West Sussex, all the greens were treated with the Speedcut Gwazae aerator during the early spring. Results were described as "outstanding" by course manager Adam Hartley.

At Piltdown Golf Club in East Sussex, Speedcut have built a new ladies tee at the 18th and a new green, as well as recontouring around the men's tee and building six other new tees, including a winter tee at the 9th.

At the Royal Mid Surrey GC paths round the clubhouse have been resurfaced with a special rubberised non-slip surface.

They also built a 52,000-cubic litre water tank which will hold extracted water from nearby Ply Brook to irrigate the pitches.

Speedcut managing director Dick Franklin said: "This has been a very busy time for our teams but we have completed projects against tight deadlines and are delighted at the number of satisfied clients who have called us in to carry out further work."