1 Speedcut gives Foxhills greens a chance to beat the rain

Foxhills Golf Club and Resort at Ottershaw in Surrey called on Speedcut Contractors of Oxford to carry out further drainage work on greens at the magnificent 440-acre course.

Speedcut contracts manager Kevin Smith said: "We carried out sandslitting on two greens in October, having done one in March, and the heavy rain during the summer showed the full extent of the problems." 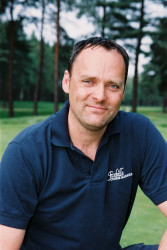 "The torrential rain in July, up to two inches in a day on two occasions, would have been a real problem on the Longcross course but Speedcut had sandbanded fairways one, two and three and they drained fantastically," said David. "Speedcut also did three fairways on the Bernard Hunt course."

David Wyborn has been at Foxhills for 23 years, having previously been at Sunningdale (with Jack Macmillan) and the New Zealand Golf Club at Woodham, Surrey.

"This has been the second wettest year on record, and certainly the wettest summer," says David. "Our drainage programme has become increasingly pressing. During the summer we were hit by dreadful rain in July, which followed a terrible winter.

"The rainfall between the beginning of October and the end of February was a record 18 inches," says David. "This summer has really hit everybody, but we were lucky because Speedcut had done such a good job."

Six of the fairways at Foxhills had been suffered last winter and had to be closed for short periods, not only because of water not draining but because of slippery surfaces in some areas becoming a health and safety issue for players.

"We decided to drain three fairways on the Longcross course and three on the Bernard Hunt course," said David.

"The soil conditions on the course vary between sand and heavy blue clay, but in general the soil is heavy and poor-draining."

The three greens that have been sandslit are on the Longcross course. "They have always been prone to wetness," says David. "But Speedcut have done an excellent job and they should now drain well."

David (44) has 18 full-time staff at Foxhills, which was created in the mid Seventies and now boasts the two 18-hole courses plus the Manor
nine-hole course.

Built on gently-undulating well-forested terrain - a typical Surrey blend of heathland and parkland - Foxhills has been a PGA European Tour qualifying school course and is home to the county amateur championships.

Rainbird Irrigation systems are in place and Toro is the main supplier of cutting equipment.

Based around a listed manor house dating from 1841, Foxhills is about three miles from the M25. As well as the three golf courses, the club also has a health club, gym, swimming pools, squash courts and 12 hard tennis courts. It also has accommodation of 38 rooms.

"Foxhills has superb surroundings," says David, "and is very challenging from a greenkeeping point of view. To maintain the very high standards drainage work is essential. Club members are very understanding and know all the work and disruption is for their benefit."

Speedcut Contractors, under foreman Peter Little, carried out both the latest drainage on the greens and the main-line drainage earlier in the year with sand-slitting over the laterals.

Kevin Smith says: "Speedcut is delighted to be working with Foxhills and we have been liaising closely with David and his team to ensure a first-class result for the club and its members.

"This year has been very challenging and the weather has played havoc with the work schedules, but we have now caught up because the autumn weather so far has been more favourable."

As well as drainage on golf courses this year, including Haverhill in Suffolk, Nizels in Kent and Broome Manor in Swindon, Speedcut have constructed sports pitches in Kent and on the Isle of Wight while carrying out regular contracts on football pitches including Aldershot FC and Windsor and Eaton FC. In July they carried out major drainage work at Chepstow Racecourse.

*Speedcut Contractors are specialists in sportsturf construction, drainage and renovation. The company was established in 1977 and has a long record of major projects in every type of sporting venue, including golf, football, rugby, cricket and racecourses. Clients include local authorities, schools and colleges.