Bob Jones has devoted a lot of his working life to Portsmouth Football Club and knows the pitch at Fratton Park like the back of his hand.

He has been at the club since 1982 and has seen the pitch through all its various stages, but believes it is the beautiful sandy soil that has been in place since the club opened in 1898 that is the key to its success.

"It's a joy to work and gives great satisfaction when you take a core out for inspection," says Bob (62), a former greenkeeper and groundsman with Portsmouth City Council.

After a period in grounds administration in the Guildhall he took the head greenkeeper job at Portsmouth's Crookham Golf Club. "I used to be keen on playing golf until I starting working full-time on a course," says Bob. "But at least I was back working outdoors and didn't have to look at it from an office window."

After his spell in golf, the Fratton Park job came up and Bob was delighted to take over looking after the "Pompey" ground.

The 20,500-seater stadium has changed little over the years, despite Portsmouth having been in the Premiership for the last four years. 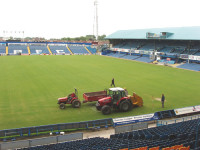 "The ground gets a going over at the end of each season with sand-banding or sand-slitting with a Sandmaster," says Bob.

Speedcut Contractors of Oxford have just carried out extra work on the west end of the pitch where drainage has been a problem.

"I have known contracts manager Kevin Smith for many years and whenever we have needed jobs doing I have called him because he really knows what he is doing and is very good at his job," says Bob.

Over the years Speedcut have carried out various drainage and pitch jobs at Portsmouth. During the 90s Bob gradually drained different areas of the pitch in stages to spread the cost.

When Portsmouth entered the Premiership budgets improved and Bob was able to carry out the resurfacing work.

"At the end of this season we sandslitted the pitch and oversowed after topdressing with an 80-20 mix, a change from the normal 70-30."

Irrigation is supplied by automatic pop-ups round the outside and trailing hose units at the centre.

Bob has only one member of staff, his deputy John Goodenough who has been with him for 18 years.

"When you work so closely with the pitch and know it so well you don't like strangers wandering over it," says Bob.

Portsmouth FC is currently proposing a new £600million stadium by the docks. The plan incorporates residential and commercial units within the complex.