0 Speedcut keeps Aldershot FC at the top of their game 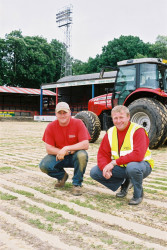 ALDERSHOT Football Club's pitch has been given some drastic extra renovation treatment following the heavy rain of the winter months.

"We had some areas of the pitch that had suffered quite a bit during the course of about 80 games," said head groundsman and former player Andy Nunn.

"We decided that as part of the end-of-season renovations we would carry out extra sandbanding between the two six-yard lines in front of the South Stand and also in front of the North Stand. We also put in an extra main drain behind the East Bank goal."

Speedcut Contractors of Oxford carried out the extra tasks on top of their regular renovation work, which includes scarifying, vertidraining and heavy topdressing with Kingsley Sand before overseeding with an R14 ryegrass seed mix. In place of the annual scarifying it was decided to fraise mow using the Koro Field Topmaker, taking off five to eight millimetres of the surface before sandslitting and sandbanding.

"Aldershot's ground benefits from plenty of light and normally plays pretty well," said Andy (42) who took over as head groundsman from his father-in-law Dave Tomlinson last season having helped him out for the last four years. Dave had been head groundsman for 43 years and on his retirement Andy, working for ground maintenance company Veolia, naturally stepped into the role. He also looks after five cricket tables and a bowling green, being an all-round groundsman with a background in local sport from his days as semi-professional for Aldershot between 92 and 96.

In 92-93 Aldershot were Diadora League Division Three winners and the following season runner-up in Division Two. Aldershot finished this last season in ninth place in the Blue Square Conference National League - safely in the top half.

The team now has a new manager, Gary Waddock, ex-QPR player and manager. "We had a very tight schedule between late May, when we do the renovations, and mid-July, when the first game is played," says Andy. "We had to get the seed into the sand and well established before then. Luckily we have pop-up sprinklers so irrigation was not a problem in the dry spring - and then the rains arrived. 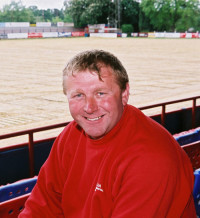 The 80-odd games at Aldershot include the first team matches, Chelsea Reserves games and the Youth Team fixtures. "The pitch has always played well," says Andy, "but that is down to a regular maintenance routine." The pitch has been in the same location since 1926 when it took over from being a public park.

Speedcut operators Paul Francis and Christopher Milln carried out the end-of-season work, while Rigby Taylor's R14 seed mix was sown by sub-contractors C and H Ground Maintenance. "The main problems we hope to avoid now are compaction on the pitch," says Andy. "During the season we vertidrain and use a Sisis Megaslit which drives blades in eight inches deep."

The soil in this part of Aldershot is very sandy and last year Speedcut applied 60 tonnes of 70-30 rootzone mix, a break from the normal routine of pure sand. Andy's fertiliser regime is three treatments of top growth mix in June, July and August with three winter treatments to keep root development going. Speedcut contracts manager Kevin Smith says: "Aldershot's pitch responds well to renovation work and plays well during the season.We are delighted to be a part of the club's success."

Photo 1: Speedcut's Christopher Milln and Andy Nunn (in reflective jacket) on the pitch during renovations.