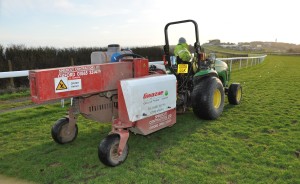 Speedcut Contractors are renovating nine pitches at Loughborough University, including two rugby pitches which they built two years ago.

Among the pitches are two football grass surfaces which have seen much action during the winter months.

"The weather has been a real problem for groundmen and contractors," says Speedcut contracts manager Kevin Smith.

"Renovation at this time of year is all about relieving compacted surfaces, topdressing and overseeding."

The Speedcut team have also renovated the outfields at Loughborough University's cricket ground and the grass area within the athletics track.

Now they are topdressing, overseeding, vertidraining and fertilising to encourage fresh grass growth for the coming year.

"We just hope for better weather," says Kevin. "We have been lucky with a brief dry spell and that has helped in early April." 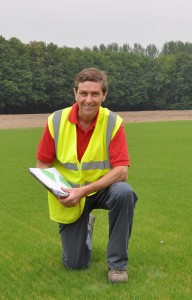 The improving weather means that Speedcut have also returned to Swansea Uplands Rugby Club where they began constructing two new rugby pitches in late summer and early autumn before the weather broke.

Having completed the cut-and-fill operation Speedcut are now installing a comprehensive primary drainage system with laterals at 3.5metre centres.

Preliminary cultivation will include ameliorating the topsoil with more than a thousand tonnes of specially selected sports sand, followed by final cultivation, grading, fertilising and seeding.

A secondary drainage system of sandbands will be installed when the grass is fully established - together with sand topdressing, vertidraining and overseeding.

*Speedcut Contractors are specialists in sportsturf construction, drainage and renovation. The company was established in 1977 and has a long record of major projects in every type of sporting venue, including golf, football, rugby, cricket and racecourses. Clients include local authorities, schools and colleges.