Unusually high rainfall during the winter months forced course manager David Wyborn to look at drainage on six fairways at Foxhills Golf Club and Resort at Ottershaw in Surrey.

Speedcut Contractors of Oxford won the contract at the magnificent 440-acre course and began six weeks of work in early April.

Contracts manager Kevin Smith said: "This is an outstanding course in the heart of Surrey and gave us the opportunity of using our two brand new laser-guided Mastenbroek 10/12Ds.

"These machines cut the trenches, remove the spoil and lay the pipeline. They are capable of laying in excess of 1000 metres a day if conditions are right."

David Wyborn has been at Foxhills for 22 years, having previously been at Sunningdale (with Jack Macmillan) and the New Zealand Golf Club at Woodham, Surrey.

"The rainfall between the beginning of October and the end of February was 18 inches," says David. "This equalled the record-brea 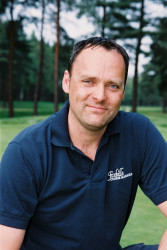 king year of 2000 when the UK was hit by serious flooding.

"Six of the fairways at Foxhills had been suffering and we were forced to close for short periods, not only because of water not draining but because of slippery surfaces in some areas becoming a health and safety issue for players.
"We decided to drain three fairways on the Longcross course and three on the Bernard Hunt course.

"The soil conditions on the course vary between sand and heavy blue clay, but in general the soil is heavy and poor-draining."

David (43) has 18 full-time staff at Foxhills, which was created in the mid Seventies and now boasts the two 18-hole courses plus the Manor
nine-hole course.

Built on gently-undulating well-forested terrain - a typical Surrey blend of heathland and parkland - Foxhills has been a PGA European Tour qualifying school course and is home to the county amateur championships.

Rainbird Irrigation systems are in place and Toro is the main supplier of cutting equipment.

Based around a listed manor house dating from 1841, Foxhills is about three miles from the M25. As well as the three golf courses, the club also has a health club, gym, swimming pools, squash courts and 12 hard tennis courts. It also has accommodation of 38 rooms.

"Foxhills has superb surroundings," says David, "and is very challenging from a greenkeeping point of view. To maintain the very high standards drainage work is essential. Club members are very understanding and know all the work and disruption is for their benefit."

Speedcut Contractors, under foreman Peter Little, have been carrying out main-line drainage with sand-slitting over the laterals. The Mastenbroek 10/12Ds use laser-guided technology to ensure total accuracy under the most exacting conditions

Kevin Smith says: "Speedcut is delighted to have won this contract and we have been working closely with David and his team to ensure a first-class result for the club and its members."