Managing director Dick Franklin said: "We had an incredibly busy week dealing with enquiries and meeting clients and potential customers.

"All our teams are working on projects across the south at the moment and we have a busy schedule lined up for this year."

Golf work is currently being carried out in Kent at Chislehurst Golf Club, Knowle Park GC, Wilderness GC. and Sundridge Park GC. Another project has just been completed at Piltdown GC in East Sussex. 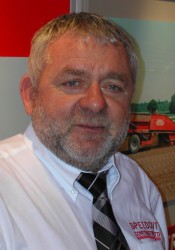 Some high-profile independent schools had new football and cricket pitches built by Speedcut, including Charterhouse in Surrey and two on the Isle of Man - King William College and Castle Rushen High School.