by Peter Driver
in Machinery & Mechanics, Industry News, and Golf
on 04 Mar 2016 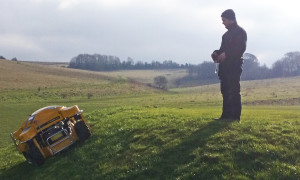 Royston Golf Cub, located on the Cambridgeshire and Hertfordshire border close to the A505, has taken delivery of a Ransomes Spider 1 remote controlled mower from their local Ransomes Jacobsen dealer, Ernest Doe & Sons Ltd.

Royston Golf Club was established in 1892 and was formed by two gentlemen from the Cambridge University Golf Union. The golf course is set out on common land, known locally as Therfield Heath, which is a Site of Special Scientific Interest (SSSI) and renowned for its flora especially wild orchids.

Course Manager Ian Coote, who has been at Royston since 2007, works closely with Natural England to manage the course and ensure that the SSSI status is maintained. Numerous discussions and meetings took place prior to the purchase of the Spider, due to the sensitive nature of the site.

"We have huge areas of banks that require managing as much as the rest of the course and cutting these has become more and more of a problem with the current health and safety laws and the sensitivity of the site, so I was tasked with finding a solution," he said.

His research found that most remote controlled mowers on the market run on tracks and he had real concerns that these would damage the grass banks and the flora that flourishes at Royston. The Spider, which uses four-wheel drive and four-wheel steering, looked to be a better alternative, so he approached Andy Rice, Ernest Doe Area Sales Manager and made him aware of his requirements. 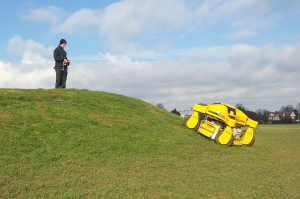 Following a visit to the Ransomes factory to view the Spider, Ian commented; "This was an excellent visit and we were so impressed by the working factory and facility at Ipswich. This was a real eye opener for me and the greenkeeping team; we were able to see products being built and it also gave us the opportunity to view the Spider. We quickly decided that a demo on site was needed."

The demonstration was took place late in 2015 and was attended by the greenkeeping team, committee members and representatives from Natural England to ensure all parties could evaluated how the performance of the Spider.

"Jason Bristow from Ransomes brought his demo unit along and in his own unique style really showed what the Spider was capable of, and we were suitably impressed" Ian added. "Following the demo, I had to compile a detailed report for the committee and Natural England to show how and where we would use the machine. I quickly highlighted 16 banks that were a health and safety risk. In addition, there were a number of other banks that would have been grazed by sheep, but this has happened less and less over the years, so these needed maintaining as well".

The committee and Natural England agreed with Ian's findings and gave him the go ahead to purchase the Spider. Early in 2016, Andy Rice and Jason Bristow delivered the Spider and carried out a full installation training course with the Royston greenkeeping team.

Ian concluded saying; "We have had the Spider for a few weeks now and it has done a lot of work already. We have one bank alongside the first fairway that was taking four staff, three weeks to cut and clear. The Spider managed to do this in just five hours. I was amazed at its speed, so this machine won't take long to pay for itself. I would recommend the Spider to any course that is having issues cutting steep banks. It has revolutionised our operations here at Royston; it is saving us time and money, but more importantly we have eliminated a real health and safety issue from our day-to-day work."

Ransomes Jacobsen is a Textron Inc (NYSE:TXT) company. More information can be found at www.ransomesjacobsen.com.