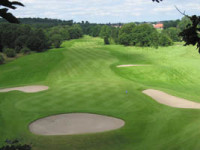 Major Charles A. Mackenzie designed Rungsted Golf Course back in 1936. It is one of Denmark's oldest and most important courses and is, possibly, the country's finest. Course Manager IAN TOMLINSON talks about a new problem that has hit areas of the course over the past eighteen months ...

In August 2006, following 10 weeks of drought, the Rungsted area of Denmark experienced 250mm of rain. Soon after I noticed grey patches forming on the 17th green. At first I thought somebody had spilled something, I had never seen grey disease like this. The spots did not move for a few weeks and then, one morning, I saw white mycelium on the scars. Was it a disease?

I quickly sent a sample to Dr Kate Entwistle. Her diagnosis was that it was not a disease but spiral nematodes - and she had never seen a sample with such a huge population of this pest!

Somewhat ironically, I had previously been invited to talk at the BIGGA Scottish Education Conference in 2005. Sharing the platform was Nematologist Dr Colin Fleming, who gave a fascinating insight into the problems of trying to control nematodes in turfgrass. Colin has been researching this problem for around 10 years in conjunction with Mark Hunt of Headland Amenity and Dr Kate.

After the conference I said to Colin "thank god I don't have nematode problems in Denmark." Little did I know that, less than twelve months later, I would be glad of his expert advice and help. 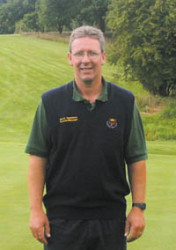 At the time of my attack the only real product which had any kind of effect was Mustard Bran which was imported in from Canada. There is only around 40 tonnes produced a year and, as you require 100gms per square metre, supplies are very limited and, when I called Colin, he told me that there was no product available but, because it was nearly September, the nematode activity would slow down going into autumn which, fortunately, it did.

During the winter of 2006/2007, with lots of rain and mild temperatures, I was a little concerned that the nematodes were still reproducing.

In early June 2007 the grey scars started appearing again, in the same place, on the same green. Once again Kate confirmed that it was spiral nematodes.
During the previous six months a new product had been trialed by Colin with excellent results. Biomass-Sugar had been used in Spanish agriculture for many years as a soil amendment, but was also discovered to control nematodes.

By coincidence, the day I contacted Kate regarding my nematodes, she was in contact with Ronald A Van Stein from Biomass-Sugar in Spain, so we arranged to do some trials on my greens.

The active ingredient of Biomass-Sugar is a hydrolysate of sugarcane - Furan-2-carboxaldehyde. The effect on the nematodes is both fast-acting and terminal. In addition, it also has a biostimulant action and is very safe to apply with no risk of scorch. The product has very little nutrient content and, unlike the mustard bran, will not contribute to high levels of nitrogen when it is applied. 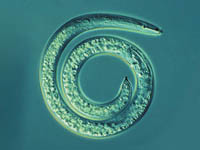 The initial application, in July 2007, was 80L/Ha of Biomass-Sugar in 500 litres of water. It is applied in a maximum of two to three minutes using the irrigation system. Rain should not fall for 24 hours after application - I had a thunderstorm and 6mm of rain after just eight hours and still the product worked.
The spiral nematodes can reproduce again within 10 to 30 days, so a second treatment was applied at 80L/Ha in August 2007. Following consultation with Colin a third treatment was applied at 40L/Ha in September to try and eliminate as many of the nematodes as possible going into the winter. A hard winter will not kill the nematodes and a mild one may allow the pest to reproduce.

Firstly, Kate found no fungal pathogens in any of my soil samples. Following the initial treatment with Biomass-Sugar we stopped the nematodes and there has been no further turf damage seen since. No fungicide was sprayed yet, if it had been dollar spot, the disease would have continued to infect the grass plants, something which stopped following the sugar treatment.

Even more evidence that it was nematodes is that, following dollar spot attacks on the STRI trial plots, they could not get seed to germinate in the scars until the following spring. Professor Joe Vargas says that it is due to staling compounds left by the dollar spot. These compounds leave the rootzone stale. I have successfully had germination twice in the scars with fescue, therefore, there cannot have been any of these staling compounds in the rootzone, which suggests that it cannot have had dollar spot.

The unknown question is what is this staling compound left by the dollar spot and why should it just disappear in the springtime?

Recently a colleague at a nearby course saw his fescue and velvet bent greens start to decline. Kate tested the rootzone and their problem was identified as Sheath Nematodes and not spiral. The damage threshold is 80 per 100ml of rootzone and they had 250.

It appears that nematodes are going to continue being a problem to all turf growers as long as the climate stays as it is, wet and warm.
Nematodes are non-selective in the grass species that they attack. Kate sees most attacks in the UK on Poa annua and Colin, in Ireland, on Fescue and Bent, but he also sees a lot of damage to rye grass on football pitches. 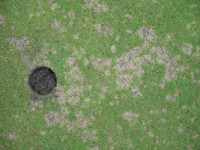 I have to admit that I went through a very difficult period with the nematodes but, thanks to great help and support from Dr Kate Entwistle, Dr Colin Fleming, Mark Hunt and Roland A Van Stein, I am now a wiser man and know what to look out for in 2008. I also thank Biomass-Sugar, which is available from Barenbrug, for saving my greens in 2007.

Like Dr Kate Entwistle, I have seen a huge increase in problems caused by spiral nematodes (Helicotylenchus). From the samples I have examined, the key points I would make are:

The photo above shows spiral nematode damage in a bent/fescue/Poa green. Interestingly, this course had 12 perfect greens and 6 showing this type of damage. The club were blaming the greenkeeper (they even suspected he had made a mistake in spraying the greens). We showed them that there was a perfect correlation between the damage and levels of spirals in the green. 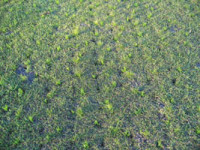 I have not checked for the presence of the dollar spot organism but, from what I can gather, in most cases the symptoms have not responded to fungicide treatment.

I know that since Kate and Mark Hunt first highlighted the root knot nematode problem, there are still individuals in the industry who have not accepted that nematodes can be a significant problem in north western Europe. Ten years ago I would probably have held this view, but the evidence has made me change my mind. Interestingly, in Ireland this year, we have had the first case ever of root knot nematode (Meloidogyne minor) damage in potatoes (causing 70% yield loss) and extensive root knot nematode damage to cereals.

The agricultural industry fully accept nematodes as the cause of these problems and suspects climate change as the key factor in the emergence of this problem. During the last year we have identified two new nematode pests causing severe damage to turf and, unless the climate starts to revert to its 'norm', I can only expect this pattern to continue.