Pitchcare are delighted to announce their sponsorship of the Waterloo Bowling Club. We have been working with the club for several years and have seen significant improvements in the surface of the green over that time. 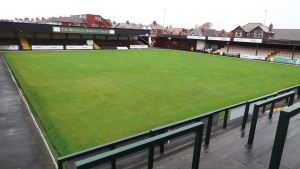 The 26th of January was the first opportunity for John Handley to meet up with Mark Audin and Gordon Butcher to assess how the green has been faring over the winter.

As the first inspection of the year, it was a pleasure to see the improvements that have been made to the green. Overseeding with Johnsons Premier Green in the autumn was a considerable success. The verti-draining that had taken place at that point in the year has significantly relieved the compaction problem and the result is a surface that was filled with grass.

Annual Meadow-grass had dominated the surface last year and, with a punishing schedule of competitions and visitors, it was proving impossible to undertake the necessary aeration to alleviate the inevitable compaction that would result. Annual Meadow-grass thrives in areas of compacted soils and, as an opportunist, it was taking full advantage of the compacted surface.

The competitions and amount of use the green is going to experience isn't going to change, and trying to undertake renovations out of season when recovery is subdued isn't ideal therefore, the best option is to try and ensure that the green is aerated on a regular basis, critically without disrupting the surface during the growing season. This will rely upon obtaining the use of a machine throughout the season, crucially when the windows to undertake the work arrive, in conjunction with the appropriate weather conditions to favour rapid recovery.

Bryum argenteum, also known as silver thread moss, an acrocarpous moss that has come to dominate many greens, particularly since the demise of fungicides such as Daconil and Daconil Silk. It occupied almost 40% of the centre of the green this time last year and was a considerable concern as to how this would affect the roll of the woods, particularly as we moved into a drier time of the year. However, these difficulties have been resigned to the sidelines as the moss has all but disappeared to be replaced by bent and fescue. 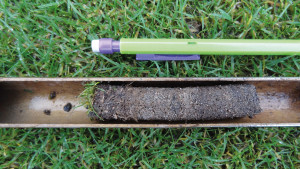 A PWS soil analysis has indicated that iron levels are exceptionally high, this is related to the soluble iron which was applied before Christmas to harden the turf off against potential disease and reduce the presence of moss. These high levels might affect the availability of nutrients such as phosphate, although these levels are already above the levels that would be preferred to inhibit Annual Meadow-grass flowering. Fertilisers will be selected with reference to the soil analysis results and the specific requirements of the turf.

Levels of thatch at the surface is a concern that will need addressing as this is keeping the surface moist; although on the day the green was visited, water was filling the verti-drain holes and simply couldn't go anywhere because the water-table was too high. Hopefully, the drying winds we've all been experiencing during February might help to dry the surface out a little. These wet conditions are ideal for Toad Rush, Juncus bufonius, a weed that favours damp surfaces and has been getting gradually worse over the last few years. Aerating to reduce the thatch would ultimately be the preferred treatment, however the disparity in the height between the grass and the Toad Rush means that a more urgent response may be required.

There were signs that Fusarium had affected the corners, these are areas still dominated by Annual Meadow-grass, and is as expected. The height of cut is currently at 9mm, with the exception of the outside mower width where the height is maintained around 20mm to sensibly protect the most vulnerable part of the green. The Meadow-grass was yellow and looking very sorry for itself, unlike the bents and fescue that have happily established themselves competitively within a short period of time. Root depth was shallow because of the wet conditions, hopefully further aeration will help resolve this. Black layer was also evident, this appears as a black, foul-smelling layer at the bottom of the rootzone. Black layer is a deposit of metal sulphides, which form when hydrogen sulphide gas reacts with metal elements (in this instance, iron) in the soil. For hydrogen sulphide to be released, the rootzone conditions must favour the growth of sulphur reducing bacteria, which requires water and soil organic matter. Hydrogen sulphide gas is lethal to turfgrass as it stops root respiration and kills the plant. Unsurprisingly, aeration is the favoured method to resolve this problem, and a close eye to what iron is applied to the green and for what purpose.