by Matthew Campelli
in Industry News
on 15 Jun 2017 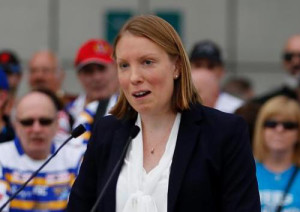 Karen Bradley and Tracey Crouch, the government ministers with ultimate responsibility to the UK sport sector, have been retained in their roles despite a post-General Election cabinet reshuffle.

Bradley was confirmed as secretary of state for culture, media and sport shortly after the 8 June vote, while Crouch was told she will continue in her junior minister role yesterdat (13 June).

While Prime Minister Theresa May made one or two key cabinet changes following a chastening General Election night, in which she saw the Conservative Party lose its working majority, several ministers have stayed in post.

Staffordshire Moorlands MP Bradley comfortable held her seat, increasing her vote share by seven per cent from her victory at the 2015 General Election.

Crouch - who unveiled the first major piece of sports policy in over a decade, Sporting Future in December 2015 - also increased her vote share to retain her Chatham and Aylesford seat.

In her first act since being retained as sports minister, Crouch commented on the damning independent report published on the culture and climate of British Cycling.

"We welcome the independent panel's report and it is right that British Cycling and UK Sport implement its recommendations and ensure the welfare of athletes is put first," she said.

"We want first class governance from all sports bodies - that is why we have made public funding conditional on adherence to the code for sports governance."

Elsewhere, the the Department of Health, which is overseeing the Soft Drinks Levy, will continue to be headed up by Jeremy Hunt, while Justine Greening remains responsible for the Department for Education - a department that has influence over school sport provision.