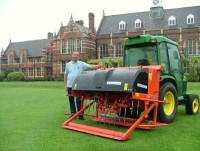 Hymers College, Hull's premier co-educational independent school, situated in the grounds of the town's former Botanical Gardens, has purchased a deep aerator from Wiedenmann UK to help provide the ultimate playing facilities for the students and visiting teams.

The school, with just under 1,000 pupils, has a tradition of sporting excellence dating back to its founding in 1893. Within its 50 acres of grounds, of which 25 acres are playing fields, it boasts five rugby pitches, four cricket squares, three junior football pitches and two grass hockey pitches.

"Our aim is to produce the best grassed sports facilities in the area", said Graham Marris, head groundsman. "The Terra Spike XP6, which we bought through our local dealer Palmers Groundcare, is the ideal machine for relieving compaction and improving drainage. The first week we had the machine, we used it every day and within the first fortnight we had completed the first pass over the whole area."

Graham is using 320mm long, 20mm diameter tines and his planned aeration regime is to aerate every month, initially to a depth of around 150mm. As conditions dictate his eventual goal is to get down to the full 320mm. Depending on soil conditions the maximum working depth of the XP is 400mm using the appropriate 20mm diameter tine.

"To penetrate to this 320mm depth the machine has to be rugged and that's part of the reason we went for the XP. It's robustly constructed, easy to adjust and for the operator, who may be using all day, the anti-vibration mechanisms provide a comfortable ride", he added.

Hymers was originally a boy's only college, but with changing attitudes to education girls were admitted into the Sixth Form throughout the 1970s and 1980s. The decision was taken in 1989 to go fully co-educational and now over 40% of the pupils are girls.