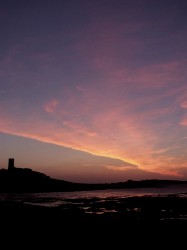 Guernsey is one of the British Isles most southerly outcrops. Only its sister islands, Jersey, and a bit of Sark, are further south. Together, with Alderney and a number of smaller islands, they are collectively known as the Channel Islands.

Guernsey is the furthest west - 30 miles off the Normandy coast of France and 75 miles south of Weymouth in Dorset. To its eternal credit, it is not a member of the EU. Neither is it part of the United Kingdom, but a separate possession of the Crown.

The climate is temperate, with mild winters and cool, sunny summers. The hottest months are August and September, where temperatures are generally around 20°C (68°F). The coldest month is February with an average weekly mean air temperature of 6°C. Snow rarely falls. The temperature rarely drops below freezing, although strong wind-chill from Arctic winds can sometimes make it feel like it.

The island is made up of two distinct geographical regions, the Haut Pas, a high southern plateau, and the Bas Pas, a low-lying and sandy northern region. In general terms, the Haut Pas is the more rural of the two, and the Bas Pas is more residential and industrialised. It has a total area of just 25 square miles and a population of around 62,000.

Its close proximity to France is evident in the names of people, places and roads. Whilst French is spoken, the first language is English. The island's most famous sporting son is ex Southampton and England footballer, Matt Le Tissier.

For such a small island its range of sporting activities and facilities is impressive and include:

• Cricket - associate member of the International Cricket Council, with possibly the best indoor cricket facilty in the British Isles

• Football - the top tier is the Sure Mobile Priaulx league consisting of seven teams - each with its own stadium and training facilities. Run by the Guernsey FA

• Gaelic football - the Guernsey Gaels compete in a European league

• Other sports - including one of the oldest softball associations in the world, a purpose built table tennis centre, an extensive modern leisure centre, athletics, hockey and rugby.

Thanks to the States of Guernsey, the island is well provided for in terms of facilities, despite the fact that there is no financial support at all from the UK government.

The Channel Islands are independent of the UK in the same way Gibraltar is, with its own government and laws. The link between Guernsey and the UK is through the Crown.

It means that all the revenues required to finance the island's services, such as health, education and sport, have to be self generated. Sources of funding available for sport in the UK, such as the National Lottery, are not available to Channel Island sports. In fact, it is not possible to buy a National Lottery ticket on any of the islands.

The Culture and Leisure Department has a rather modest £3.6 million annual budget, of which just £967,000 is allocated to the Leisure Services section. The department also receives £250,000 a year for capital items, but this has to be shared between various sections and is not just for sports facilities and services. Nonetheless, the facilities are extensive and of a high standard.

The island, along with Jersey, operates a Channel Island lottery, but the amounts raised are relatively modest. The leisure centre does receive some funding from this source, but the bulk of the proceeds goes to Guernsey charities.

The States attracts significant help from the local business community, and many support sport through sponsorship.

Online gambling company, Sportingbet, moved its European operation to the island three years ago. Employing 100 staff at its headquarters in St Peter Port, the company has become heavily involved with local sport.

In its first year on the island, the company secured a three year sponsorship deal with the Watson family to help their daughter and local rising tennis star, Heather, in her bid to become a world class senior tennis player. Since this deal, the largest sponsorship for an individual in the island, Heather has reached number three in the world (Juniors), won her first major grand slam (The US Junior Open 2009) and has turned professional.

Managing Director, Bob Dutnall, explained, "As one of Guernsey's major investors in the local community, the company is dedicated and passionate about wanting to make a real contribution, whether this is through sponsorship, fundraising, employee volunteering or mentoring. The company is immensely proud of the success of these relationships."

Wealthy benefactors have also been known to give local sport a boost. One such case in question is cricket which, thanks to the generosity of businessman, Jon Ravenscroft, has one of the UK's best indoor cricket centres. Opened by former England captain, Mike Gatting, in April last year, the huge 1200 square metre hall can host two matches simultaneously, as well as providing an area for coaching or fielding practice.

It has to be said that such a level of benevolence is exceptional, and most sports generate their funds through more usual means, such as subscriptions.

Despite the not insignificant investment in the island's facilities, unfortunately, the States has not been able to please all its sporting groups. The impressive Foote's Lane stadium, with its 6 lane athletics track and newly redeveloped stand, is the showpiece venue for most of the island's major events. Until recently, that also included the annual football match against neighbouring rivals, Jersey, with the match alternating between the islands, Known as the Muratti (after a cigarette company), the fiercely fought fixture attracts a couple of thousand fans. However, the Guernsey Football Association have decided that the intimacy of one of its own club venues, albeit with a poorer standard facility and playing surface, is preferable to a stadium pitch surrounded by a running track.

On a more positive note, the Culture & Leisure Department and Guernsey Sports Commission are keen to promote the island's facilities as a training base for one of the smaller nations taking part in the 2012 Olympics. If successful, this would be a great PR coup for the island and would provide a once in a lifetime opportunity for Guernsey youngsters to see Olympic athletes in action on their own track. The resident athletics club, based at the stadium, originally had some reservations, but would now welcome a visiting team of Olympians or Para-Olympians.

Alan Hamilton looks after two cricket grounds on the island and was project manager of the new, state of the art Indoor cricket facility.

Alan's opportunity to come to the island was through Jason Shambrook, Guernsey's Cricket Development Officer against whom he used to play in Northampton. They had been on cricket courses together and, when the Guernsey Cricket Association started talking about bringing someone over in a groundsman role, Jason recommended Alan.

Alan has been kept busy overseeing the building of a brand new square at Port Soif, home of Rovers Football club. The square came into play this summer. The main cricket facility on the island is at the King George V playing field.

A comprehensive article on Alan featured in issue 28, but here's what he has been up to recently:

"After an extremely wet winter, we find ourselves watering like mad after having around seven weeks with no significant rain here in 'sunny' Guernsey!

How quickly things change! Saying that, temperatures have not been as high as we had hoped (as I'm sure is the same on the mainland), so seed germination hasn't been as good as it could have been - especially when we have to get from football and rugby pitches to cricket outfields in about two weeks!

On the cricket wicket front, both King George V and Port Soif have produced an encouraging amount of runs for early season games. Having taken some advice from Andy Mackay (Sussex CCC Head Groundsman), we have tweaked our rolling programme and pitch preparation slightly, and it seems to be doing the world of good. It is amazing to think that such small adjustments to our daily routines can have such a big effect on the way our pitches play. Simply rolling for different amounts of time, and leaving more grass on wickets in the build up to games, has produced drier, harder wickets which, in turn, have produced more runs and higher scoring games.

At Port Soif recently, we were lucky enough to host the Sussex 2nd XI for two fixtures which was, hopefully, a forerunner to hosting a First Class game in the not too distant future. All went really well, and the tourists were very impressed with the facilities, both on the pitch and off it. Grass practice wickets, fielding nets and a general training area are all par for the course in a first class match, and the Sussex coaches and players reported that all were very much to their liking. Watch this space!

With the ICC European Division 2 Tournament looming (July 13th-19th), we have to be more aware of our wicket usage on the squares. On our nine wicket square at KGV, we will use five wickets in the space of two weeks during the build up to, and during the tournament. It is a similar situation at Port Soif, where we have eleven wickets.

This event is the highlight of our cricket season and, having successfully hosted a European tournament and, more recently, a World Cricket League tournament, we are looking to maintain the high standards we have set for ourselves. Hopefully, our national side can do us proud on home soil and become victorious on July 19th."

There are currently ten clubs on the island, all very active and very much involved with the community in running teams (senior, juniors, girls and womens) playing at various levels. All have reasonable standard stadium and social facilities, and generate their own funds to maintain their operations.

During my visit, I was able to see a number of these grounds which, on first impression, looked in good condition. However, when it came to a closer inspection of the playing surfaces, they all lacked the polish I was expecting. Presentation, grass cover and levels were poor. Admittedly, it was coming to the end of a long playing season, after a poor winter and a very heavy fixture list.

Talking to some of the clubs, it was apparent that the lack of resources was a contributory factor. Equipment is basic, in most cases just an ageing mower and a linemarker; the odd club had access to an old spiker. The work, in virtually all cases, is undertaken by volunteers who lack proper groundsmanship knowledge.

The States of Guernsey Works Department offer end of season renovation works (pitch repairs, deep aeration and overseeding), but some of the clubs consider this service to be too expensive, so renovations are often restricted to some localised repairs, seeding of worn areas (goalmouths and centre circle) and little else.

In many ways, the clubs on Guernsey are in the same situation as many on mainland UK - they have other pressing priorities with regard to players, coaching and clubhouse requirements, and they rely heavily on the goodwill of their volunteer members.