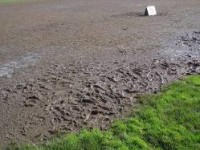 Parents, sports mad kids and those older players who are still giving it a go on the sports field will all know about the amount of times fields were closed for play this winter - and many of them have had less than complimentary words to say about the people making the decision to close them. Criticism has been levelled at councils, parks officers, and turf managers with the standard of turf management, amount of funding and amount of resources all coming under fire. (Picture right: Figure 1: Memories of winter 2008).

In fact, there probably hasn't been a winter playing season like it for many years where there has been such a flurry of negative comments expressed in the local and national media about the condition of sports fields and the amount of field closures that have taken place.

There is no doubt that disruption to sports programmes was severe this winter. In July for example, only about 10% of scheduled soccer games for the Auckland Football Federation were able to take place, that is, a mere 217 games played out of a total of 2400 planned. Some frustrated parents, as indicated in their letters to various newspapers, expressed shock that "a little bad weather leads to grounds being shut" and some even suggested that "councils should give parents a refund" .

The situation was not helped by some inaccurate reporting from some newspapers which contained what many would consider unhelpful opinions expressed by individual clubs. This just goes to show how difficult it is for the average bystander/reporter to understand what is going on without knowledge about the turf industry .

Nevertheless, it was encouraging to see that some sports code administrators tried to smooth the waters between players, parents, coaches and councils during this frustrating time. And in several cases councils allowed fields to remain open at the end of the season to catch up with the backlog of play, crucial, as pointed out by David Parker CEO of the Auckland Football Federation, to "retaining player numbers and maintaining club viability" .

So where does that leave the sports field sector of the turf industry? Battered and bruised is probably how most in the industry are feeling after the miserable winter and bear in mind, this was a national problem, not a local one. Clearly there is an image, educational and perception problem out there, as well as a resourcing issue.

HOW BAD WAS THE WEATHER REALLY?

We all know the winter was wet, but how wet is wet? According to NIWA's National Climate Centre, winter rainfall was over double the normal amount in Marlborough and Canterbury, and about one and a half times the normal amount in Auckland, Waikato, Bay of Plenty, Taranaki, Manawatu, Wellington, northern parts of the Southern Alps and coastal Otago . Near or record winter rainfall totals were recorded at 26 weather stations around the country and for nine of these locations, it was the highest winter rainfall on record.

Furthermore, not only was the number of days with rain much higher than average, but also during July and August there were several major storms around the country, meaning that the weather was even more extreme.

So, for Auckland East during July for example, there was approximately 250 mm of rain over 25 of the 31 days of the month compared with last year's figures of 177 mm of rain o

ver 15 days. Most of the July rain this year fell at the end of the month with 151mm falling during the last week. In terms of sports field closures (i.e. total closed hours/total available hours) for Auckland East, the overall effect of winter 2008 was as follows:


Not surprisingly, those clubs who chose to ignore the call not to play on closed sports fields completely trashed them (Fig. 3).

Figure 3: Sports field damage caused by players ignoring field closures and who played under atrocious 2008 winter weather conditions. Not only does this sort of irresponsible use damage the field for the rest of the season, but it usually prevents the field from being maintained - leading to more complaints!

And, of course, it wasn't just sports fields that were affected. According to Dave Smith, Course Superintendent of Remuera Golf Club, his course was closed for two weeks in July and for one week in mid-August, plus the odd single day. A total of 643mm rain fell on the course between June and August, 200mm more than the average. Health and safety concerns were one of the side effects of the bad weather, as some of the banks around the course became too dangerous to walk over.

SO WAS THE TURF INDUSTRY BEING OVER-PROTECTIVE OF ITS SPORTS FIELDS?

In a word, no. For one thing, it was not always the councils or their representatives that closed fields. For example, according to Harold Driver of the Parks and Reserves Department of Dunedin City Council, games were only cancelled twice by the council, with the rest of the time being by the associations themselves.

But we do acknowledge that in the Auckland region at least, it was the juniors that suffered most, particularly with soccer, where the governing body preference was to run with senior games over junior if fields were closed. According to Matt Cresswell of North Shore City Council, since the junior competition was re-jigged a few years back with a requirement for junior fields to be separated from senior fields, a lot of junior fields had to be located onto training areas or poorly-drained outlying areas. Also, with the competition split over three councils (North Shore, Rodney and Waitakere), large scale field closures in one or all of these regions meant that it was easier to cancel whole grades (invariably junior) so that competitions wouldn't get out of synchronisation. So junior soccer in Auckland suffered massive disruption, which the councils have attempted to mitigate by extending the season.

In practical terms, standard sports field drainage systems will only be able to cope with so much rainfall - it is unrealistic to expect stadium budgets to be available to design local authority sports fields so that they can be played on in all weather conditions. The analogy here is similar to engineers designing a storm water system - they may typically choose a one in five year storm event to design to, recognising that a one in ten year storm event would be too expensive. The same approach is used with sports field drainage design, but there is one catch - many sports fields in urban areas are specifically designated as flood plains when the one in five year storm event is exceeded - so even a field with good drainage may still get flooded out!

Even if the best way to increase winter usage is to improve drainage and increase the number of sports fields, it is extremely difficult in places like Auckland City to acquire more land because of the huge cost involved. And let's not forget that the cost of upgrading or renewing sports fields rarely comes from clubs themselves, but from the council via the ratepayer or from development contributions. Add to this the fact that clubs and players pay only for a small percentage (typically 5-10%) of the maintenance costs of sports fields (some councils like Manukau City Council do not even charge users), then it could be argued that the occasional really bad winter is just one of those things to plan for - just like farmers have to and other people involved in land-based industries.

Typically, one in seven Auckland winters is bad, but we haven't had a one in seven year winter for about 10 years. Therefore there is a whole generation of players, coaches and administrators who probably haven't experienced a really bad winter and who probably have an expectation that fields are typically useable throughout any winter - hence, 2008 closures appear totally unacceptable. 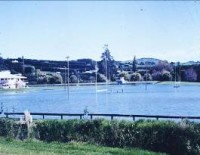 Figure 4: Many sports fields in urban areas are designated flood plain areas under severe storm events - in other words, a storm water detention device - they are designed to get flooded.

And most importantly, it shouldn't be forgotten that public sector sports fields are administered by councils. Under the Local Government Act, councils have an obligation to provide stewardship in relation to their assets. So sports fields need to be managed in exactly the same way as other council assets (e.g. leisure centres, libraries) with opening and closing (i.e. booked) hours; councils have an obligation to provide long term sustainable management of their sports field assets for all users - and that means making sure the fields are closed if there is a risk of long term and unsustainable damage to the asset.

HOW CAN WE PREPARE FOR THE NEXT BAD WINTER?

Mike Gallagher of Auckland City Council has suggested that we do not talk about 'closures', but instead talk about managing play to keep a field open, focussing on the fact that a field has a limit for the amount of time it can be played on. This is a sensible approach. Strong council and contractor relationships with the governing bodies of each of the main sporting codes will also make for easier management of the situation and help take the political heat out of the issue to a degree, as Matt Cresswell of North Shore City Council experienced this winter.

David Parker's comments about codes working at the policy, planning, LTCCP and budget end of the process should also be taken on board and in fact this is already happening. For example, Manukau City Council has nearly completed a similar study that Auckland City Council carried out a few years ago, looking at present capacity/demand and future capacity/demand. This type of activity certainly gives direction as to what capacity increase is needed and where.

This then raises the question as to how capacity can be increased in a particular area. Perhaps the answer is to turn sports fields into stocks and shares so that when they take a dive, the government will bail them out with large amounts of money!!

But in all seriousness, the Sports Field Forum and Turf Industry Profiling Group will be working hard over the next few months to help educate administrators, clubs and players to appreciate the science of the turf industry - what is below the ground, what are the repercussions if play takes place regardless of the weather, why fields have to be closed from time to time, and how the users and administrators can contribute to the sports field renewal and upgrading process. Knowledge is a wonderful thing - and if the turf industry can achieve a better public understanding of sports turf management, then it will allow more of the public into the unique and special world under the sports surface - and hopefully get buy-in to what we are trying to achieve.

And finally, let's get rid of antiquated words like 'paddock' when describing sports fields. If people continue to compare highly technical sports surfaces with a basic agricultural field, then perhaps they should continue to expect to be wallowing in mud!

Figure 5: Then and now - a quarter of a century of improvement is sports turf technology. Onewa Domain No.2 field on 21st August 1981 (left) and the same field at the end of winter 2008 (right).1981 photograph courtesy of Jim Burgess.