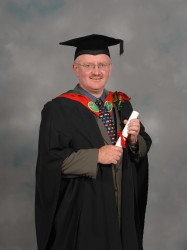 Mike was awarded the fellowship in recognition of his achievements in forging International links between Myerscough College and The Ohio State University.

A dual citizen of America and Ireland, Mike grew up on a small dairy farm in Southern Ireland. He won a scholarship to attend a Horticulture College in Dublin which was the springboard to his world travels. He now manages a programme for The Ohio State University, recruiting Agriculture, Horticulture, and Turfgrass students from over thirty two countries every year for training in the United States.

Mike was instrumental in helping set up the 'Study Abroad' programme which Myerscough College co-ordinates, bringing not only students but Master Gardners into Britain every year from the States to gain experience in British Horticulture and explore our wonderful public gardens and parks.

Additionally, Mike has introduced other Universities to Myerscough, encouraging them to send students to Myerscough, most notably Auburn University and, as a result, that exchange has grown over the years. Mike also encourages tutor exchange between Myerscough and Ohio State University.

Ann Turner, Myerscough College's Chief Executive and Principal, said: "It is a pleasure to make Mike O'Keeffe an Honorary College Fellow. His outstanding achievements in the Sportsturf industry are an inspiration to all our students and he has proven to be a great friend to Myerscough College over the years."