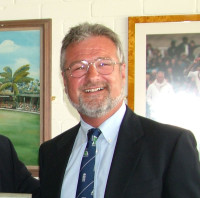 It's that time of year again. Some will have already started, some will question what all the fuss is about, some will want to start only to find that the roller will not, others will not bother at all, some will not even have a roller. Who is right? Perhaps the answer should be, is anybody wrong. There are so many variables. Different soil types and conditions, climatic variations, different size of rollers, is a roller available. Most groundsmen are volunteers and may only be able to roll when time is available, evenings and weekends.

In my role as an ECB Pitch Advisor I see it all, from big heavy bomag types to various forms of pedestrian to not having one at all.

One thing I am absolutely sure of, it has to be done! But how much? And for how long? Generally I would say the more time spent pre-season rolling while the soil is moist the more consistent most wickets will be. But for how long? Who knows!! Anybody who uses the P.C. web site will know every individual will have their own theories, dependent on their own experiences.

The general view taken is, if it works for you why change it. My only challenge to that statement is, if you never experiment how will you know if you are achieving the optimum result.

At the present time, Cranfield University is carrying out ongoing trials into the science of rolling clay soils that are used in cricket wicket construction. Early indicators regarding drum size and time spent rolling have emerged. It must be remembered that these trials are taking place indoors and all our squares are outside laid bare to the elements, so any results can only ever be guidelines.

However, scientifically proven guidelines are at least a step in the right direction in are never ending quest to produce the best surface to play this wonderful game on. 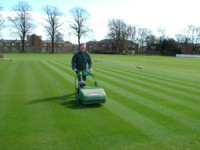 When do we start? There are two terms used, pre-season and spring rolling. Is there any difference? To be honest, I am not sure. My view is that the first class game carry out pre-season rolling, because they often need grass wickets ready to practice on during March.

Many will have carried out four weeks rolling by the time you read this article. Hence pre-season. However, these will still contain significant moisture. In the recreational game, wickets are not usually required until mid April, so most of us have another couple of weeks to prepare, hence Spring rolling.

I like to start my programme of rolling when spring has sprung I rarely start until the third week in February, But this can be as late as mid March. Ground and weather conditions will always dictate. When do we finish? As soon as we feel we have reached maximum consolidation. Some years that can be as early as the end of March, others the end of April.

A ball park programme will be as follows. From 1st March, roll the square daily for a period of approx six weeks. Bearing in mind that there will be wet days, family days and many other reasons why a daily roll might not take place. By mid April the square should have been passed over at least thirty times. I usually find this acceptable, but occasionally I may do a few more passes. 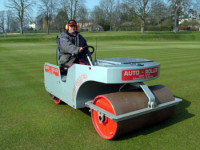 Many clubs will only have the option of one roller, some may have a choice. The key to success is how you utilise what you have. A 30" or 36" mower is an ideal first roller. Weighing approx 5 cwt it is perfect for the first 5 or 6 passes of the square. Adding a trailing seat for another 3 or 4 passes can be very beneficial.

If you do not have a heavy mower, you may have to make do with a small pedestrian garden roller, even your small mower, with a weight in the grass box is better than nothing.

If you then have access to a roller of around one ton in weight, use it for another dozen passes or so. Finally we get to the heaviest roller. This should be unballasted initially, adding a little extra ballast, after every couple of passes. Every pass of the square I make, I do in a different direction, ie both diagonals and across the line of play. I do not roll in the line of play, until the roller is fully ballasted. This is usually about the time that I am preparing my first wickets of the season.

What is the ideal ground condition? Science will eventually tell us. Whether we shall be able to measure for optimum conditions remains to be seen. I believe the S.T.R.I. will be offering a service that will inform us of when we have achieved maximum consolidation, this will of course come at a cost, but could be very useful.

I have not met anyone yet who admits to enjoying spring rolling, so any measure that tells us that we have done enough will be very welcome. I have no desire to spend a moment longer rolling than I need to. In the meantime we all have come to rely on experience and gut feeling.

This takes years to gain, and even then there is a certain amount of guesswork involved. However I firmly believe in a couple of golden rules. Never put a roller on the square if when walking on it, your foot brings water to the surface, and never try to do too much rolling in one day. In the early stages at least, I never roll the square more than twice in one day.

Remember that we want to consolidate the square, not make a pudding of it. In the later stages, as the square gets harder you may be able to make several passes, providing there is warm sunshine, a breeze blowing and you either have several volunteers to help, or that you have plenty of time with nothing else better to do. 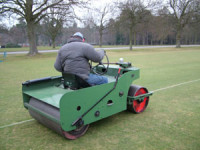 All rollers weigh more heavy on the ground the slower they travel, so towards the end of your programme the roller should be travelling quite slowly. Never ever use any vibrating facility that a roller has. In fact disconnect it, it will only weaken any breaks or separations that exist within the profile, leading to problems with consistent pace and bounce as the soil profile dries.

Poorly maintained squares, that have surface thatch, thick fibre, light soils or layering will very rarely improve with lots of rolling. Trying to roll thick thatch and fibre will nearly be a waste of time, as the surface will only spring back, just as a sponge would, should you roll over one

For anyone who has read this far and is confused then I apologise, but I am not surprised. As I stated earlier, there are so many variables. It can be a very difficult subject to get a fix on. However, I am convinced of one thing, you have to do it, it has to be done. Happy rolling and enjoy a good 2007 season.