The RDS is Dublin's premier venue; slightly smaller in size than the Harrogate Exhibiton Centre, but with the addition of a main stadium arena where Leinster RUFC play, and two showjumping rings. Throw into the mix, concerts, exhibitions, other sporting events and the world famous Dublin Horse Show, and it is clear that Head Groundsman Gary Deakins has his work cut out. Alan Mahon went to meet him on the eve of a Leinster v Cardiff Blues game. 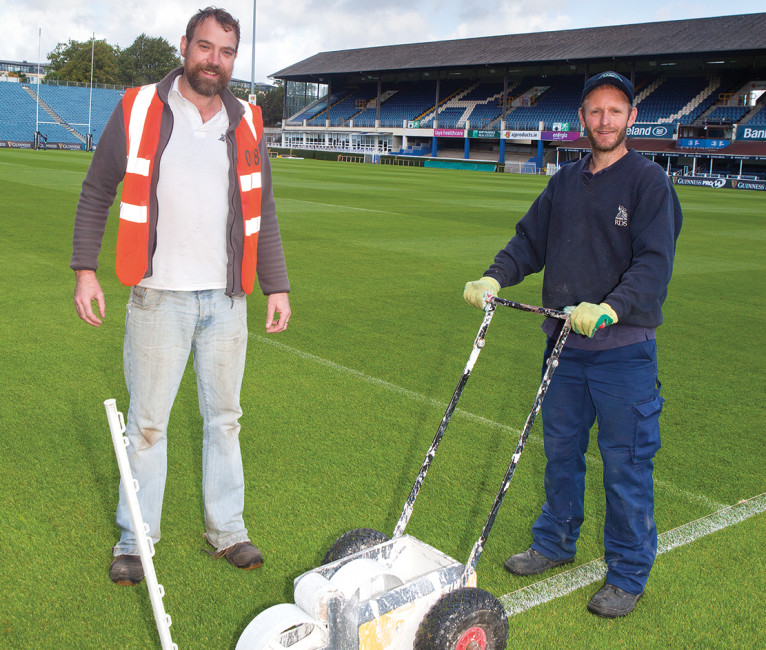 One cannot help feel a sense of history as you enter the grounds of the RDS. It was founded in 1731 to support Ireland to thrive economically and culturally. Back then it was called the Dublin Society, but the name changed to the Royal Dublin Society in 1820.

The Society's broad agenda was to stimulate economic activity and aid the creation of employment in Ireland. For the first few years of its existence, the Society concentrated on tillage technology, land reclamation, forestry, the production of dyestuffs, flax cultivation and other agricultural areas.

When I arrived at the Ballsbridge site, I had to walk through the pathways leading to the main arena where I was to meet Head Groundsman Gary Deakins. It was a hive of activity as I made my way, as all departments within the complex were preparing for the influx of fans and supporters for the match that night - the Leinster v Cardiff Blues Guinness Pro14 rugby match (previously called the Heineken Cup).

Fast food wagons and delivery vans with supplies of burgers, hot dogs, fries and hot drinks lined the corridor dividing the two jumping rings. Electricians were on hand ensuring all connections were in order, along with the cherry pickers checking that the stadium lights were all functioning properly. In the centre of all this activity was Gary, busy linemarking the pitch for game. He finished one of the lines and came over to me to do the interview. We sat on one of the benches in the Anglesea stand.

Gary was born in Johannesburg, South Africa. Soon after leaving school, he travelled to the US where he taught school kids how to play golf. In 2000, he went to England to work as a greenkeeper at Lanhydrock Golf Club in North Cornwall. It was here that he started a three year block release greenkeeping training course. By the time he finished training, he was working at St. Enodoch Golf Club (after spending a short time at Bowood Golf Club). Gary then travelled to New Zealand where he worked at Jackspoint Golf Club near Queenstown which, at the time, was a brand new golf course under construction.

In 2007, Gary's brother and wife emigrated to Ireland. They liked the country so much that they encouraged him to move there. In 2008, the position of gardener was being offered at the RDS so Gary applied for and got the job. Three years later, he was promoted to head groundsman and has remained there ever since. He now lives locally with his partner and their two year old daughter and four year old son.

Gary is probably the only groundsman in Ireland who is responsible for preparing the same pitch for two vastly different sports - rugby and showjumping, not to mention the concerts that are held there as well. Alan Ryan helps Gary maintain the pitches. Larger jobs, such as topdressing, spraying and fraize mowing, are contracted out. 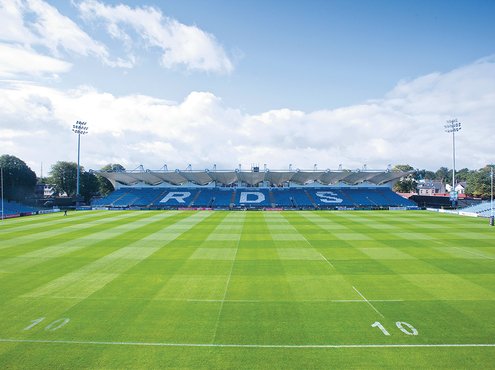 The pitch in the RDS main arena is used mainly for the Leinster team's home matches. Winners of three Heineken Cup titles, Leinster have trained and played at the RDS since 2005. Previous to that, they occupied the grounds at Donnybrook Stadium. The only time they don't play a home game at the RDS is when large crowds are expected; usually at the final and semi final stages of tournaments (seating capacity at the RDS is 18,500). In these situations, they hold their home games at the nearby Aviva Stadium.

The year from beginning to end

At the beginning of each year, Gary finds himself in the middle of the Guinness Pro14 rugby season. Pressure in getting the pitch in perfect condition mounts as the championship has already reached the halfway stage. From now on, every point earned for the home team is crucial.

When the last rugby match of the season finishes, usually in early May, depending on how Leinster progress in the tournament, the fraize mower is hired to rip out the old turf. Then the pitch is verti-drained, topdressed and overseeded. The stands behind the goals are also taken down at this time.

This year, Gary had to contend with the Justin Bieber concert that was scheduled for 21st June. He had a seven week window to get this work done and have a healthy sward ahead of the concert. An application of a slow release fertilizer (28:5:5 + iron) was given to help the grass recover in time.

A couple of days before the concert, Terraplast was laid over the pitch. This is a white plastic cover that protects the pitch from wear and tear from concert goers. One of the properties of this material is that it lets sunlight through to the grass, which helps the turf survive the four days it is covered for the concert. Gary tells me that, when they removed the Terraplast, the grass was a little hungry and yellow. "It was time for a quick feed of 9:7:7," says Gary.

As well as the Terraplast removal, the concert stage had to be dismantled and taken away. When this was done, the area of turf that was beneath the stage was verti-drained and overseeded using a dimple seeder. Time was of the essence for Gary, as the next big event to worry about was the world famous Dublin Horse Show, which is held in early August. 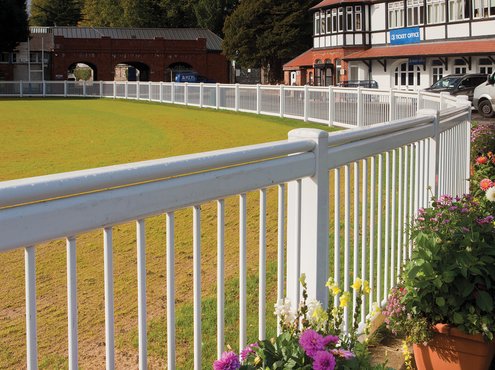 This event has been held at the RDS since 1864 and attracts thousands of visitors each year. Six weeks remained for Gary to get the turf in tip-top condition. He cut the grass between 26-28mm using a pedestrian rotary mower. In the week leading up to the horse show, a triplex ride on mower was used to mow the sward.

During the five days of competitions, Gary and his team work around the clock. The jump areas in the main arena have to be repaired after each round of competitions. Extra staff are brought in to help with this. For this event, Gary arrives at 5.00pm and doesn't finish until 6.00am the following morning. During those hours, he has to hand water dry areas, repair damaged parts of the arena, take readings for moisture levels, traction and drainage, and carry out Clegg Hammer tests to record surface hardness. A lot of responsibility falls into his lap, but he deals with it calmly.

When the horse show finishes, all the jumps and flower containers have to be removed, including the water jump, which is set into the ground. The void left by the water jump has to be filled and returfed. When this is completed, the pitch is raked and cleaned of debris and verti-drained. A topdressing of 60:40 peat/sand is applied (the peat is to help retain moisture levels). This mixture is also used to repair divots. When this is complete, the pitch is overseeded and another application of 9:7:7 is given. 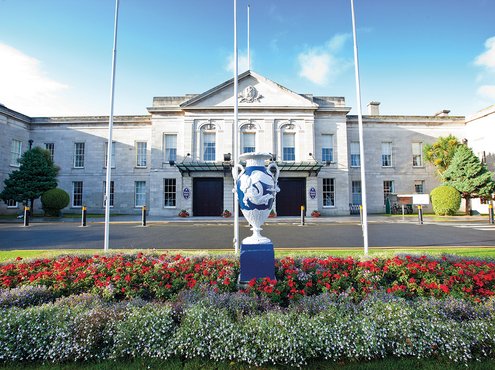 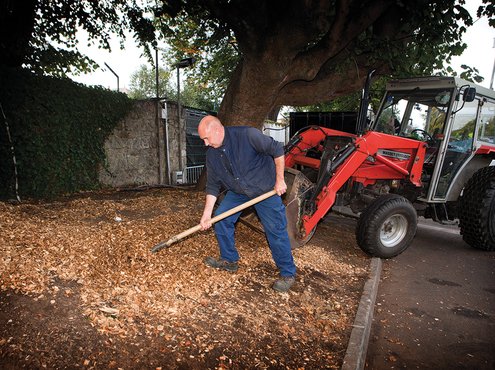 Left: The impressive main entrance with stunning floral display. Right: One of the gardeners loads up some mulch for spreading around the stands

I should not forget to mention about the other two areas that Gary has to maintain. These are the two jumping rings that are outside of the main arena. As I interviewed Gary, he told me that he had fraize mown and overseeded jumping ring No. 2 two weeks earlier. I could see the young grass shoots emerging. Jumping ring No. 1 was only overseeded this year. There is also the sand jumping ring at the south end of the complex that needs looking after.

Time creeps up once more as the start of the rugby season is only four weeks away. The height of cut of the pitch is raised to 35mm for the rugby matches (raised to 40mm during winter). Applications of liquid feed are given, along with regular sand topdressings. A slow release fertiliser is applied to help the grass throughout the winter.

September is not long approaching. The hard work that Gary has put in to keep the main arena in tip top shape is put to the test. At the time of writing, Leinster had won three out of their four Guinness Pro 14 matches. The main arena will be taking a lot of abuse and hardship for the rest of the year and into next year as the rugby season gets into full swing.

The year is now complete. As Christmas approaches, Gary can look back with pride at another successful year at the RDS, but it is no time to rest on his laurels as 2018 is just around the corner, when the year will begin all over again. No rest for the South African who has made his home in Ireland.

That night, after my visit, Leinster beat Cardiff Blues 37-9.

Alan Mahon is editor of Greenside, the official publication of the GCSAI.