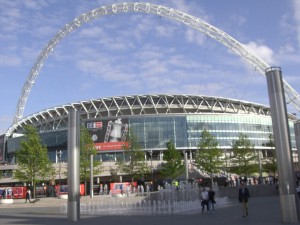 Tottenham Hotspur FC has secured an option to play its home league and cup games at Wembley Stadium while work on its new ground is being completed.

The agreement forms part of the deal the Premier League club has reached with the Football Association (FA) to play next season's Champions League matches at the 90,000-capacity stadium.

After qualifying for the Champions League through a third-place finish, the club is required to move to another venue in order to meet UEFA requirements as work will begin on the White Hart Lane site over the course of the 2016/17 season.

Populous are designing Tottenham's new ground - which is expected to be ready for the 2018/19 season, assuming local infrastructure such as transport is developed in time. The North London club will have to vacate the facility during the 2017/18 season, in which it looks increasingly likely to play at the national stadium.

Money generated by increased use of Wembley Stadium will be ploughed into "improving coaching and grassroots facilities and growing participation", according to FA chief executive Martin Glenn.