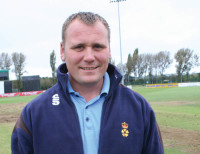 Derbyshire County Cricket Club are now entering the final phase of their ground redevelopment programme, the primary aim to turn the square a full 90O from an east/west to a north/south orientation. It was a move born out of necessity.

The original decision for Derbyshire to play in an east/west direction was taken decades ago, long before floodlit, televised cricket came into the equation.

With the advent of day/night limited over matches and, more recently, Twenty20, the setting sun threw up a huge problem for players during the high summer months, as it went down behind the bowler's arm whilst shining straight into the batsmen's eyes.

This unfortunate alignment with Mother Nature meant that, unless there was a modicum of cloud cover, the game had to be delayed, often for up to an hour, until the sun had gone down. In the last couple of seasons the club have used a large screen on a telescopic hoist to block out the sun and, whilst this somewhat 'Heath Robinson' method has been successful, it was not ideal. Therefore, the turning of the square was the logical step to take.

The cost of the project includes ground works (building of the new pitches), installing a pop-up irrigation system in the outfield, moving the main scoreboard, relocating two of the floodlight columns, erecting a new 350 seat marquee and building a 2,000 seater stand.

The latter will be completed ahead of the 2010 season (on the Bank side of the ground) and will provide prime viewing from behind the bowler's arm. The work will bring the ground capacity up to 7,850.

The extensive and logistical ground works have been a two-year project for Head Groundsman, Neil Godrich, and his two full time assistants, 'Bub' Hatton and Ben Howe. He also employs his assistant head groundsman, Steve Hollis, on a summer contract.

Neil became head groundsman in 2001 after being with the club since 1994. This coincided with the club receiving a substantial amount of money from a benefactor, which they immediately invested into upgrading the facilities on the ground, including the twelve bay practice net area.

In 2007 another major project was undertaken when the outfield was koroed off, regraded and reseeded. Now Neil is bringing the latest project to a conclusion.

The work of turning the square began in September 2008 with the construction of twelve new strips at right angles to the existing square - six either side. Whilst this has meant that bowlers have been running over the new strips, with wicketkeepers and slips scuffing around at the other end, it was the only way that the work could be carried out without disrupting the 2009 fixtures. 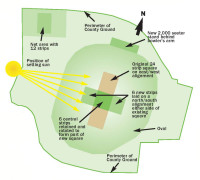 Neil hired in a Koro Field Topmaker from Boughton Turf Management, taking off the surface to a depth of 100mm and infilling with a 100mm of Boughton County loam (32% clay). One hundred and forty tonnes was added in 50mm layers and consolidated, leaving the new soil slightly proud of the surface to allow for any settlement.

The new strips were oversown with a Johnson's Premier cricket seed mix. Once this had germinated it was a case of stimulating growth through the winter and spring so that the new strips would be ready to be part of the 'outfield' for the 2009 season. Regular cricket square maintenance regimes were being carried out on the remaining east/west strips.

So then, Neil had a 'square' that was a unique cross shape. The original square had twenty-four strips on it. The new one has been reduced to eighteen, with eight of these (four each end) providing practice pitches during the 2009 season. This has allowed Neil to monitor their performance and, so far, there have been no problems, other than keeping them covered to retain their firmness.

At the end of this season Boughton were brought in to fraise mow the new square, taking off about 10mm of vegetation. Neil and his team completed the rest of the work, cleaning up, scarifying in two directions with their Sisis Rotorakes, topdressing with Boughton County loam and overseeding with Johnson's Premier cricket seed mixture. The same work was carried out on the twelve bay practice net area. A total of seventeen tonnes of loam was used (twelve on the square and five on the practice nets).

The square and net areas will be aerated a couple of times to a depth of 100mm, once in November and once in

December, using the Groundsman spiker fitted with triple needle tines. The outfield will be aerated using a vertidrain later in the winter.

At the time of writing, the installation of the new outfield irrigation system was imminent. This will consist of thirty-two pop-up heads, a brand new tank and pump. All this work will be carried out by Osprey Irrigation.

All this ground work has also meant that the boundaries have had to be extended or, in some instances, reduced by a few metres to accommodate the new square and comply with ECB regulations.

To help protect the new square the club invested in new flat sheets from JMS Cricket and Stuart Canvas. These two companies were Neil's preferred choice and, as you can imagine, the covers have been in constant use this summer, as has the recently purchased Blotter!

Another recent purchase has been a new Autoroller that can be ballasted with water in half tonne ratios.

Since becoming head groudsman at Derbyshire CCC, Neil has been encouraged by how progressive the club is. This has meant that he has been 'full on' since he took over the reins. He has nothing but praise for the commitment of his staff and the dedication they show to producing the best pitches.

Neil has also been grateful for the support he has had from Boughton Loam & Turf Management, who always go out of their way to help and supply specialist equipment at a moments notice.

Once all the renovations are completed the staff will be taking some long well earned time off, recharging their batteries after an eventful and long season.

Available time to prepare pitches is reducing as the fixture list gets more and more crowded. The weather has also had its part to play with time to prepare a decent wicket being compromised.

Where once fourteen day preparation was the norm, now it is more like ten days. It is a new challenge, one that Neil will surely face head on in the coming seasons albeit on a brand new square.

At least the sun won't be setting on Derbyshire Cricket Club next season. Indeed, the future looks bright!