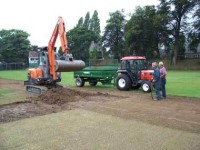 The last game of the season took place on Sunday 11th September. Boughton Loam Turf Management were due to arrive on Monday 12 September to dig up the middle five wickets to a depth of 100mm. A mid morning phone call informed me that they would not now arrive until mid morning on Tuesday 13th September.

I duly arrived at work at 8am to find that Julian and John from Boughton Loam had already strung out the area and had started to half moon and to dig out around the edge. This was completed by about 9.30am.

The next operation was to remove the saddles at both ends of the square. This would enable the newly laid block to marry in with the wickets on either side more easily. This was carried out with a Blec tractor mounted power rake. Three passes were made leaving behind a fine tilth. This was scraped up later by the digger.

First stage completed, Julian and John had a coffee, loaded up, and were gone by midday. Before leaving, Julian had informed me that the first of two 20 to loads of loam were due to arrive at 8am Wednesday morning.

I arrive at 7.15am to fence off an area of the car park to tip the loam, and to allow room for access for the digger etc. Too late, the first 20 to load was already waiting, the 2nd load only 20 minutes away and, in between, the digger, tractor and trailer arrive. No sooner had the second lorry left when a third 20-ton load arrives. All this and its barely 8.30am! I have already worked up a sweat but, more to the point, I have not had my early morning brew. All these vehicles had travelled down from Derbyshire; can people not sleep there!!

The base was dug, cleaned out and made ready for the new material. The site was left clean and tidy, with lorries re-loaded and gone by 12.30pm. 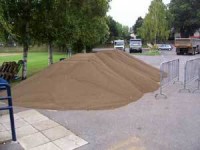 Lorries unloaded, the power harrow is taken to the hole to crumb up the base. Job going fine, almost finished when at about 8.30am the rain started. Dave quickly finished the area and got off. Andrew had been dragging a levelling frame over the crumb but also had to get out.

The lads waited until about 10.30 amwhen they decided that even if the rain stopped the ground would be too wet to do any more today. So the lorries were re-loaded and the lads departed on the three hour trek back to Derbyshire, having only managed one hour's work.

Dave rang me later in the afternoon to inform me that they would be back on Saturday to finish off. This would allow the ground time to dry during Friday.

Once again I arrive at about 7.15am, Andrew, John and Ray are already on the job. Andrew has already levelled the crumb and the base is being firmed using the heaviest tractor.

This completed, the first layer of topdressing goes down. This is applied through a hydraulically operated top dresser with a belt driven floor and a rear rotating brush. A very even 2mm spread of loam is possible right from one end of the wicket to the other.

As each spread is laid, Ray and John rake in the edges to obtain an even finish. Once the first layer is down Andrew and Ray drag a ladder down, across and then back down again to level the applied top dressing. This done, the heavier tractor is used once again to firm the soil, the tyre tread leaving a key ready to receive the next application of topdressing.

By now it is about 11.30am and everything is going well. Andrew starts to load the top dresser ready to apply the final layer of topdressing.

I might add that Simon Tremlin was taking an IOG autumn/winter course at the club, so I was flitting between the two. We were looking forward to lunch when Andrew approached me with a hydraulic pipe in his hand. This did not seem a good sign as it was now past midday on Saturday. A few phone calls and two hours later the pipe is fixed and top dressing operation carries on.

When applied, the ladder is again used to level the surface before the heavy tractor is again used to firm the soil. Seed and fertiliser is applied and raked into the surface, job done bar for the cleaning up of the site. By the time this was done and the lorries were re-loaded it is about 5:30pm and, after the customary handshakes, Andrew, Ray and John departed for the three hour journey home.

All that is left for me to do is to cover the square with germination sheets and water. As it was Saturday tea-time this will wait until Monday morning as we borrow the sheets from the rugby club. I only hope the pigeons leave me some seed to cover.

The weekend was dry so everything was fine bar for a few fat looking pigeons. My assistant, Gregg, and myself walk over to the rugby club to arrange the collection of the two big frost covers.

By the way, for those of you who may know him, Darren the rugby club groundsman he had a nasty accident. A motorbike tangled with him while he was walking to work last week. He has suffered a fractured skull and a smashed leg. He is expecting to be off work for eight months. However, I spoke to him on the phone today and he is back at home and is as well as can be expected, and is already bored.

We arranged the collection of the covers and return to finish off the square. This entailed dragging a ladder down the power raked ends trying to level off the discrepancies. We then laddered the two areas of square either side of the re-laid pitches. We used an extra ¾ ton of loam doing this.

The frost covers were then collected, laid over the entire square and pegged down, and the travelling sprinkler set to work. It was now 5.30pm and we were both completely knackered, so we went home.

The first signs of germination were visible by Saturday 24th September, so we took the sheets off. Over the following week the grass grew and greened up nicely.

Come the afternoon of Tuesday 4th October, 17 days after planting, I took the rotary mower, set at 25mm to the square for the first cut.

On Friday 7th October I mowed the square with the 36" Allett set at 19mm. If ground conditions allow I will cut it again on Monday 10th October.

I have to say that the biggest part of the square has come back well and looks superb. The re-laid area is coming on but grass cover is thinner at the moment, but it looks as though it might catch up. Let's hope so.

During the week, 3rd - 6th October, we also scarified the outfield with my tractor mounted Graden. We did one pass and cleaned up with my lita-mania brush. This resulted in eight truckloads of arisings, the club has a Nissan Cabstar being taken to our second ground to be dumped. Once the outfield had been mowed afterwards you would hardly know that we had made such a mess.

Well I hope this article has been of some interest to some of you. Should there be any comments for me to answer, I shall apologise now for any late replies as I am off on holiday for a couple of weeks. Top up the tan for the winter.