Ebbsfleet United's shirt sponsor may be Eurostar, but they are about as far away from getting into Europe as you can get. Nevertheless, it's clubs like this that are the bedrock of English football. This one has a tale to tell though, on and off the pitch.

The Conference South club, a stone's throw from the Dartford Crossing toll queues, is unique in the way it is financed. I talked first to its chairman, Phil Sonsara, to find out where the money - such as it is - comes from, and how the club finds the budget for the upkeep of its Stonebridge Road ground amid massive pressure right now to save cash all round.

Until three years ago, Phil had never even been to Gravesend and Northfleet, which is what the club had always been known

as. What sparked his interest, and led to the unusual way the club is run, was an on-line project called MyFootballClub, an internet society with the laudable aim of helping a struggling non-league football club. Borne from Google-ing and Face Booking amongst those with a general love for the game, it quickly caught fire. Phil's bit of online trawling at the time led him to chairmanship of a club he hadn't previously known.

Gravesend and Northfleet actually changed its name to Ebbsfleet United in May 2007, as part of a Eurostar sponsorship deal. The MyFootballClub acquisition was first announced in November of that year and the purchase was finalised in February 2008.

"Members participate on a daily basis," says Phil, "and there is regular two-way communication between them and the club on all sorts of activities." The weakness in this ownership model, he admits, is finding enough bodies with enough time to be regularly involved at the club. It simply doesn't generate enough funds to pay for full-time day-to-day administrative management. 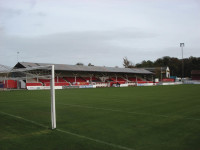 "Members have regular jobs and, though very well meaning about the project, can only find two or three days occasionally to be here at best. The value they add in monetary terms has been enormous though."

At the time the MyFootballClub society took off, there were several contenders for this new source of cash support - Leigh RMI was one from the north. But, it was Ebbsfleet that got the nod and, nearly three years ago, it became the first, and still the only, football club to be owned by an internet society.

Phil says an amazing 53,000 football fans showed initial interest, many of them from the north, perhaps, he suggests, because there was a rumour, at the time, that struggling Leeds United could have been in the frame for help. It wasn't, and it was the north Kent club that had a new ownership regime.

It was, and still is, a noble idea, but there has been a fall-off in MyFootballClub membership. The flood of £35 subs three years ago has dried significantly, and now there are around 3,000 members coughing up a £50 sub to have a say in how the club is run. Of these, quite a large number have been to Stonebridge Road, some from as far afield as the USA and Canada, as well as all parts of Europe. 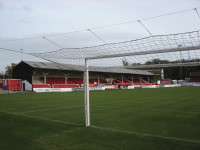 Phil, and a number of others, give their services voluntarily: some do essential tasks for a pittance. The kit man - also a volunteer - goes about his business ahead of a Tuesday night training session as we chat in the home changing room. "It's just the nature of small football clubs," Phil says.

The most remarkable of Ebbsfleet's helpers is its groundsman, Peter Norton. That he is a lone star is one thing, but the fact he is seventy-eight puts him in a league of his own.

It would be true to say that, like so many grounds at this level, Stonebridge Road is far from swish but, as I step on to the pitch with Phil, it was instant promotion several times over. It was a marvellous playing surface, the kind you'd expect these days at a Premiership or top football league set-up where there's staff and equipment in abundance. Here, there's just Peter.

Football has been played at the ground since 1896. Then it was Northfleet United, later Gravesend became involved, and now it's Ebbsfleet. As Phil says, these days it's literally a daily battle for survival on and off the Stonebridge Road pitch. 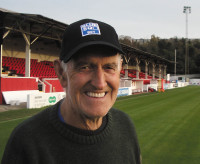 Relegation last season to the Conference South, aka Blue Square South, was a blow, but far from a fatal one. The club is now handily placed on the brink of the play-off places and Peter Norton's pitch belies any notion that Ebbsfleet might be a club without ambition. Days after I visited the ground an away draw at AFC Wimbledon in the first round of the FA Cup meant welcome 'cash in the tin' from a home replay and the possibility of another home payday against MK Dons. On such ifs and buts are the financial ups and downs of clubs like this balanced.

What makes Peter Norton so special isn't just that he works alone or that he's well past retirement age. It's the fact that he gets paid very little for his devotion to his splendid pitch and, what he does get, he ploughs back into equipment and materials. As Phil says, he is a diamond.

Very often, if a new piece of kit is needed, he just gets it at his expense. He loves the club and what he does that much. He doesn't have to work. He has state and work pensions enough for his needs, he says. His shed-cum-workshop at the ground is well stocked with kit, not state-of-the-art, but all beautifully maintained and, as Peter put it, perfectly adequate for the jobs I need to do.

Club finances are dicey, confirms Phil, and very much governed by home fixture income, which can be between £8,000 and £10,000. If there's a spell of away matches, which there had been when we met, cash flow is strangled. 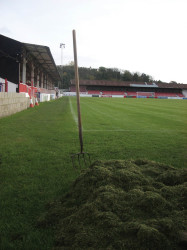 There is no budget, as such, for pitch upkeep at Ebbsfleet. Things are dealt with very much on an ad hoc basis. This autumn, Phil says, there was a recurring problem with worms and, in order to raise the £300 cash for a contractor, an appeal was placed on the MyFootballClub website. As this magazine was going to press, the worms still had a stay of execution but, walking across the pitch I must say, they seemed to be keeping their heads down.

I get to meet Peter. He's unloading his car. He lives and breathes the Stonebridge Road pitch. He comes in at 10.00am seven days a week, come rain or shine, and still finds time to look after the greens for a bowling club at nearby Greenhithe, which is run by Empire Paper Mills, part of the Reed Group. Peter worked there until 1980, and this is where he acquired his interest and skills in pitch care.

Peter is an instinctive groundsman. He never works the same way twice and doesn't do repetition, he says. He looks at the pitch each day and just decides what needs doing. This autumn, the aforementioned worms have been a specific on-going problem for him, and he's hoping the website appeal brings forth cash to remedy things. He has a vexed look. These irritants are a blot on his perfect pitch landscape. He says spraying had already taken place this year but, being a sand-based pitch, the level of rain had encouraged activity. Calling someone in to spray a second time is one of those rare occasions when Peter enlists outside help.

The current Stonebridge Road pitch - 112 yards long and 71 yards wide - was laid twelve years ago, says Peter. It's been in his sole charge since then. He says he reckons the job is like being an artist. No high tech needed, just an eye for things. It's his pallet.

It seems that alternating rolling and cutting is one concession he does make to any kind of repetition and this, he says, has to fit around Tuesday and Thursday training evenings and any home matches. 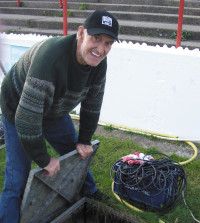 Ebbsfleet manager, Liam Daish, a former Coventry City player, likes the pitch cut quite short for matches and training. Peter is quite happy with this and duly obliges. As the playing staff are part-time professionals he does, at least, have the pitch to himself during the day. He says it takes him two hours to cut the whole pitch using a Countax ride-on with collector brush.

We are a third of the way through the season and the goalmouths are immaculate. Peter's recipe for this is, now and then, to sprinkle them 'like pepper' - as he describes it - with a little topdressing of 50:50 sand and soil and some seed. It clearly works.

He reckons this season - worms apart - the pitch is as good as it's ever been. The thick sward and sandy rootzone love the rain, and there's been plenty of it.

In summer's dry spells, what Peter calls 'the dog', his description of a portable irrigator with a 20-metre throw, is used to keep it moist. The grounds proximity to the Thames - barely a mile away - means the water table can be just two and a half feet or so from the surface and this, undoubtedly, is an aid to growing conditions, but there is a downside.

Metre deep gravel slits for drainage take most of any excess moisture away but, if the table rises too much after rain, they cannot handle all of it and pumping is necessary. In winter, it can be a nightmare, says Peter.

Beat the weather: never get caught in the weather: that's not only Peter's philosophy for seeing that his beloved Stonebridge Road pitch is always in top order, it was the catch line of a record he made for the club to mark its appearance - and 1-0 victory over Torquay United - in the 2008 FA trophy at Wembley. It was something of a hit, just like Peter Norton is to the Ebbsfleet faithful.