0 St Enodoc - a Golf Course that is Sheer Poetry Cornwall is, arguably, one of the most beautiful parts of the British Isles, and its spectacular coastline and miles of beaches have made it a popular summer holiday destination for tourists who make the annual pilgrimage south west in search of pirates and pasties.

Bordered to the north and west by the Irish Sea, and to the south by the English Channel, there can be few places in the country where the effects of the sea are so keenly felt. The more exposed northern coastline receives the full force of the prevailing winds from the Atlantic Ocean, unlike the more sheltered 'Cornish Riviera' to the south.

There has been a links course at St. Enodoc, in the fishing town of Rock, since 1891. The initial three holes were set high on the cliff tops overlooking the estuary of the River Camel and Padstow Harbour.

The two 18-hole courses, Church and Holywell, were originally designed by James Braid in 1907 and remodelled by him in 1935. The longer of the two, the Church, regularly ranks in the UK and World Top 100 lists, and holds favour with golfers who like the challenge of a traditional English links as the undulating terrain, towering dunes and

Atlantic winds present golfers with a true test at every hole. None more so than the unique 375 yard 6th (main picture) where, following a blind drive, golfers must tackle the 75 foot high bunker known as 'Himalayas', rumoured to be the biggest in Europe.

The 11th century St Enodoc Church sits nestled in a dune surrounded by the course that bears its name. Hit a wayward shot from the 10th and you could well find your ball in the churchyard where Betjeman himself is laid to rest.

Scott Gibson has been a greenkeeper at St. Enodoc for seventeen years, and Course Manager for four. He believes that his knowledge of the courses, from starting as a nineteen year old, gives him a unique knowledge of the various microclimates that exist on the site.

He leads a team of twelve, which includes a dedicated gamekeeper and his female Harris Hawk named ... Dave who, between them, have removed 1,500 rabbits from the course in the past year.

When he took over the reins, more than 170kg of nitrogen per hectare was being applied to the course each year - on par with a parkland course - leaving the greens soft and un-links like. Scott is gradually weaning it off and now applies around 95kg per hectare per year. He's been successful in reducing the amount of Poa annua on his greens. He applies Primo Maxx each month at a rate of 1-1.5 litres per hectare. During the season, he aerates using 8mm tines and overseeds with topdressing containing fescue seed. He then verticuts once a month to a depth of 2mm and topdresses again, this time mixing the dressing with bentgrass seed. This process has enabled him to change the species composition to 30% fescue, 50% bentgrass and 20% Poa.

He is pleased with the progress that has been made, but it hasn't been without its problems. It was during the remodelling carried out at the club in 2006 that he encountered a problem that would take four years to resolve.

"We had moved the 16th green back around seventy yards to increase the length of the hole," Scott explains. "Being located in the south west, we had to bring in fescue turf that wasn't indigenous to the area. It couldn't have been placed in a more challenging location. The green is north facing, closest to the sea and bares the brunt of cold westerly winds and salt spray. Needless to say it struggled from the moment it was laid."

"It had weak, stunted growth, a yellow appearance as if it was nitrogen deficient, and we had minor outbreaks of Dollar Spot. We tried to encourage it by hollow tining, overseeding with different cultivars of fescue and by applying low nitrogen, high potassium fertiliser, but four years later, it showed no improvement."

It was at that point that Scott sought advice from Mark Rayner, Key Accounts Manager at Everris, formerly named Scotts, who visited to see the problem for himself. 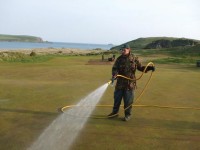 scue renowned for its salt tolerance.

Bred in the USA by Pure-Seed Testing, Inc. and characterised as part of the country's National Turfgrass Evaluation Programme (NTEP) for cool season grasses, Seabreeze displays outstanding salt tolerance, making it ideal for use on Links and coastal courses and when effluent water is relied upon for irrigation. It has a bright green colour with a spreading, low-growth habit that is adapted to a pH range of 4.5-8.0. It's shade tolerant and, as well as producing a high-quality playing surface, its attractive unmowed appearance makes it a good choice for low-maintenance turf and for use in deep roughs and on slopes.

The development of Seabreeze was an important R&D breakthrough for turf managers working at sites where salt compromises turf quality. Combined in ProSelect 3 with 25% Florensate Strong Creeping Red Fescue and 25% Treazure II

Chewings Fescue, it was awarded the Everris Salt Tolerance icon, having shown an impressive 95% survival rate when placed in a salt bath containing 10,000 parts per million NaCl. The Everris seed icons - for wear, salt, shade, drought and cold tolerance, plus visual merit and low-growth - are awarded to best-performing varieties that have been subjected to intense trials and have met or surpassed rigid standards for measuring tolerance or resistance.

"We didn't overseed any differently with the ProSelect 3 than we had with the other seed mixtures we'd tried," Scott confirms. "We hollow tined and cleared the cores, topdressed with indigenous dressing, and overseeded at a rate of 25g/sqm. In the clinical lines of holes, each hole was like a little seed pot. I was more than a little surprised to see germination at 15-17 days, where I'd expect three to four weeks for a fescue mixture to germinate normally. From that point, growth was strong and consistent and the newly established grass married in well with the existing grasses. We applied a wetting agent and soil conditioners, including iron and seaweed but, apart from that, the sward has matured without any additional nutritional inputs." 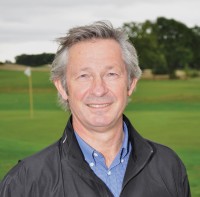 "It's cut with a fairway mower and divoted, as its part of the fairway, and we're really pleased with its progress. It has a pure fescue appearance with a strong, consistent sward. In order to ensure that we have hardy turf that's compatible with the conditions here, we're now thinking of sowing a turf nursery, so we can mature turf to our requirements and lift it as it's needed."

Mark Rayner was also impressed with the results, and hopes they will generate further interest in salt tolerant varieties: "I was very pleased to be able to offer Scott a solution to his problem with our ProSelect 3 mixture. All Everris mixtures that contain icon-awarded grass varieties have excelled in an extensive R&D process. Turf managers are used to selecting grasses on the strengths of various attributes, such as wear, drought and shade tolerance. We are pleased to offer salt tolerant varieties to course managers managing links and coastal courses, and to those using effluent irrigation water, to assist them in their efforts to produce high quality playing surfaces."

How straight it flew, how long it flew,
It clear'd the rutty track
And soaring, disappeared from view
Beyond the bunker's back -
A glorious, sailing, bounding drive
That made me glad I was alive.

And down the fairway, far along
It glowed a lonely white;
I played an iron sure and strong
And clipp'd it out of sight,

And spite of grassy banks between
I knew I'd find it on the green.

And so I did. It lay content
Two paces from the pin;
A steady putt and then it went
Oh, most surely in.
The very turf rejoiced to see
That quite unprecedented three.