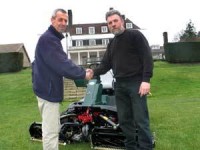 St John's School in Northwood, one of the most prestigious fee paying boys primary schools in the UK, has recently taken delivery of a Hayter MT313 to maintain the fine turf sports areas around the school.

Situated in North West London, St John's was first established in Pinner in 1920 and was bought by the Merchant Taylors' Educational Trust in 1984 The school has some 400 pupils aged from 3 years to 13 years and many of the pupils go to the Merchant Taylors' School a few miles away, following their primary education at St John's. The extensive grounds cover almost 40 acres and include 30 acres of sports fields which have to be maintained to the highest standard. This is where the MT313 will spend much of its time, particularly on the cricket outfield. With only 4 grounds staff who also have many responsibilities in the school itself, the pressure is always on to look for ways to help maintain the grounds quicker but without sacrificing standards.

David Doughty, although having 16 years experience at St John's, has no particular machinery preferences; he looks for the machine that will do the job required, irrespective of who manufactures it. After carefully researching the market, he decided to go for the Hayter machine. The factors influencing his decision were performance, build quality, manoeuvrability, operator comfort and after sales service. Commenting on the purchase David Doughty said. "The decision to buy the Hayter machine was taken after looking at all the machines available and we are confident that we have chosen the best machine for our application. I have to say also that our decision was helped by the fact that Browns of Chesham are the supplying dealers; we have dealt with them over many years and cannot fault the support they have given us at St John's."

The photo shows David Doughty on the right with Peter Hopkinson from Browns during the handover of the MT313.