by Craig Ritchie
in People and Football
on 16 Apr 2016

Tommy Docherty has tirelessly served the club for the past 32 years, experiencing the highs and lows which go hand in hand with following the town's only professional football club 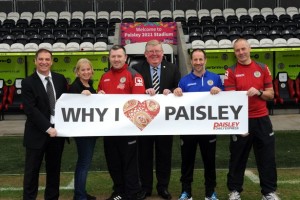 St Mirren Football Club has been the pride of Paisley since its inception in 1877.

For more than 100 years, supporters have lined the terraces, passed through the turnstiles and sang alongside one another to lend their backing to the men in black and white stripes.

The faintest whiff of Bovril or the smell of freshly cut grass brings the memories flooding back of the old Love Street. The rickety old main stand remains in the memories of Buddies across the town.

Managers have come and gone, and a hoard of players have enjoyed fleeting spells. But one thing is for sure - the workers and supporters will always be here.

But there is more to St Mirren than the 11 guys kicking a ball about the pitch on a Saturday afternoon. A hardy band of staff work tirelessly to keep the club ticking over on a daily basis.

From washing the kits to pulling the pints in the hospitality suite, there is much more to Saints than immediately meets the eye.

The players might pull on the revered strips once a week, but the busy bodies behind the scenes ensure the club is represented every day of the week.

As Paisley ramps up its bid to be crowned UK City of Culture for 2021, St Mirren have joined forces with the Paisley Daily Express to promote our Why I Love Paisley campaign. And we go behind the scenes to find out what the club means to the people that pass through its doors every day.

One man that has seen more than most is the club's head groundsman Tommy Docherty, so much so he has lost track of the amount of managers he has seen in charge.

Tommy has tirelessly served the club for the past 32 years, experiencing the highs and lows which go hand in hand with following the town's only professional football club. Growing up a Paisley boy, he admits that the club has been central to his life.

"I've seen hundreds and hundreds of people passing through the club, from managers and directors to staff and players," Tommy said.

"I love it here. Growing up in Paisley, you are never too far away from St Mirren."

On the payroll at the club since 1984, Tommy has seen it all. A stadium move, cup wins and relegations have all been enjoyed and endured throughout his time at the club - but it is the glory days that he savours most.

He added: "There have been a lot of highs, and a few lows, as well as we all know.

"Winning the Scottish Cup in 1987 was one of the best memories I have. It was just a brilliant day for the club and the town.

"We have also won a number of league titles in between times, and then there was the cup win three years ago under Danny Lennon, which was another fantastic day."

Despite all the change, Tommy admits the club remains as important to him as it was the day he first walked through the door.

He said: "Things move on. The technology and the machines are all different and it is hard to keep up with it.

"But, at the end of the day, St Mirren will always be St Mirren."

For the full article, visit www.dailyrecord.co.uk.