Since our early season worries about stability and softness in the surface we were confident that we had beaten the problem. Throughout the months of November, December and January we played quite a few games without any real problems and the pitch, to be fair, was coping with the season as well as any other pitches in the Premiership. 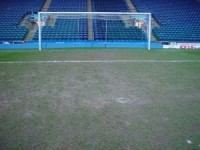 We tried on numerous occasions to defrost the sprinklers around the pitch using blow lamps, but to no avail. The pitch is constructed of about 90% sand under the turf surface and is, as we had found in the past, a very good conductor of heat, so the pitch stays at a constant temperature of + 7 which is about 40F. The real problems start when we can't apply any water, the profile just dries out so quickly it's really frightening. 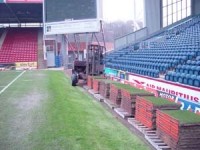 Checking the root structure with the trusty soil probe was very worrying as well, because I could see the whole thing starting to crumble in the high wear areas on the pitch i.e. south end goal mouth and, to a certain extent, throughout the middle where it had thinned down with normal wear. As the games came and went the problem was becoming worse and, with the weather not helping with anything in the way of rain or any milder conditions, I began to think about slab turfing the goal mouth area at the south end of the stadium.

The decision to do this was probably made easier by the fact that, after the youth cup game played at Ewood on the 6th of March, the next fixture was against Arsenal on the 13th. So, we decided to turf tile the area from the goal line out to just beyond the penalty spot, using rootzone tiles because the company I use, Inturf, didn't have any fibre re-enforced tiles available for harvesting. 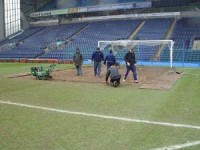 The team arrived on Friday 12th at 6.30am with the 96 turf tiles to do the repair work. After a full English breakfast at the famous Ewood cafe across from the stadium the crew started to dig out the whole area, after some very careful measuring and re measuring. With the skip dropped close by for the spoil, and with three crews with wheel barrows, we soon had the area dug out. The turf tiles were 50mm thick, so a lot of care with the tape measure throughout the whole operation was a must. In no time at all the guys started to lay the tiles, with two men at each side of the trays sliding them out into position. With a bit of persuasion with the rake, they were then flush with the edge that had been cut out.

Throughout the day some people were thinking the job would not be done in time for the match the following day but, knowing how the company works, gave me great confidence. By 4.45pm the last of the tiles had gone down and I started to irrigate the area for the lads to finish off with a final roll. After completely flooding the new turf tiles the guys started to roll the tiles to get them to seat in, which they did very well. 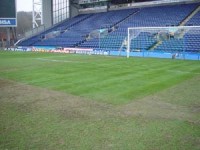 Saturday morning and, with a quick roll with my very own mastiff, and the tape measure to mark out the new penalty spot and 6 yard line, the whole thing looked ok (or as good as you would expect in just one day). To my dismay and annoyance the two goals scored against us were both conceded at the other end of the pitch. Anyway, we got through the game with just a few more dried out divots.

However, it just goes to show that an undersoil heating system is not a groundman's friend at all. The damage caused by the heating system will start to improve, hopefully, when the weather picks up but, as I write, we only had a +1 temperature last night and we're nearly into April!

Best of luck everybody.