It was a nippy autumnal morning, as I made my way up to this secluded golf course hidden away from the hustle and bustle of city life. I say secluded even though only a handful of miles away lies the capital city of Dublin.

Having worked as a course superintendent myself, many years ago, in nearby Stepaside Municipal Golf Course, I assumed my journey to Stackstown would be effortless. However in those intervening years much has happened. New housing developments, the expansion of Sandyford Industrial Estate and the building of a super car park called the M50 confused me somewhat. But I got there in the end.

Almost every hole at Stackstown enjoys panoramic views of Dublin's Fair City. Well, after all, the highest point of the course is located 235 metres above sea level. Yet, despite the close proximity to the city, there are parts of the course where you would think you were a million miles away from civilisation. Nestled in the foothills of the Dublin Mountains, this 140 acre golf course is a credit to Course Superintendent Ed Mulligan and his staff. 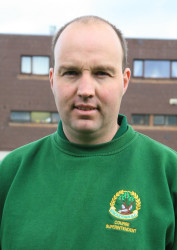 Ed is the local lad. He was born and reared up the road in Kellystown where his home overlooked the course. Little did he think that one day he would be responsible for the upkeep of this, now famous, golf course.

Ed intended working in the Garden Centre business, but, after doing work experience on the par three golf course in Marley Park, as a student from the Botanic Gardens, his mind was quickly made up. He wanted to pursue a career in Greenkeeping.

Stackstown started as a nine hole golf course on 109 acres in the early 1970's. It was formed by a number of people, of whom Paddy Harrington was one. Paddy was the father of Ireland's famous golfer, Padraig Harrington. Those group of people were members of the Garda Siochana.

An old cottage on one of the fairways

In 2004, the green on the first hole was completely redesigned and constructed to USGA specifications. It was seeded with Poa Reptens Truputt. The following year another six greens were redesigned and built, this time, however, Ed used the turf from the old greens to form the putting surface. All these greens were designed by Ron Kirby with insight from Padraig Harrington. Padraig officially opened the new six greens in 2006.

Ed advises anyone who is considering redesigning and returfing a green, to construct a turf nursery first. It is often the case that a new green is bigger than the original, so, having a bit extra is always useful. Even if it is not all used, a turf nursery will provide sod for repairing damaged parts of greens on the course and it is also a useful area for carrying out trials before trying them on the main greens.

It was the late Pat Doyle of Avondale Landscapes who carried out the construction work, with Aquaturf doing the irrigation. Turfgrass Consultancy are the agronomists. Plans are in place to eventually bring the remaining soil greens to USGA standards.

Other work carried out on the course lately has been the improvement of the pathways. Most of them are now completely surfaced with tarmac and more will be completed next year.

As one would expect, all the greens and tees are irrigated, with additional irrigation on landing areas. 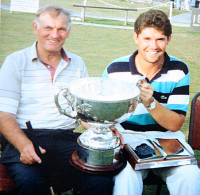 As a young boy, Padraig Harrington started his golf in Stackstown. His father Paddy was his mentor and was no mean golfer himself, playing off a handicap of around five. With the many titles he won as an amateur both in team and individual events, it was clear that this young boy was destined to become something special. He would be seen practising on one of the holes for many hours during the day, often in the presence of his father.

There is a great buzz within the club and understandably so. They are mighty proud of their hero. Winning the British Open last July was a dream come true for all keen Irish golfers. You can imagine the ecstasy within the club when he held aloft the Claret Jug.

A very unusual phenomenon exists within the club. Three of its members are now touring professionals. Padraig Harrington of course being on the European Tour, while Michael McDermott and Mark Campbell are both on the Challenge Tour. 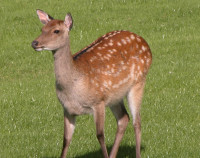 When I arrived at Stackstown I was told that there would be a strong chance that I would see some of the semi tame deer which frequently wander around the course and are very popular with members and visitors, but can sometimes give grief to the greenkeeping staff. Well I was out of luck. Not a deer in sight. These Sika deers do cause a bit of a problem, leaving their hoof marks in the greens during the winter months.

Every year, one or two members of the club release up to one hundred pheasants into the woods. These birds are reared as chicks. These I did see.

Other wild animals seen around the course are grey squirrels and badgers. There used to be red squirrels in abundance but Ed tells me that he hasn't seen a red squirrel in Stackstown for almost five years. The greys seem to have wiped them out. These grey squirrels cause more problems for Ed than the deer do as they strip the bark off any newly planted trees. "They can get a bit cheeky at times" comments Ed "they can often be seen running around outside the clubhouse in full view, emptying the bins in search of any scraps they can find"...

A pair of sparrow hawks had nested in trees on the course this season.


It was a great experience travelling around the course with Ed, marvelling at the wonderful greens and splendid views of Dublin. To have walked the ground and visited the clubhouse where Padraig Harrington grew up was something special, particularly in the year when he won that hard fought Claret Jug. Mind you, there was one thing that dissapointed me. With my hand on my camera, in anticipation, that prize photo of a Sika deer eluded me.

Perhaps I will return and get that prizewinning photo! 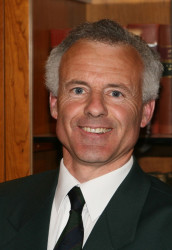