by Matthew Campelli
in Renovations & New Builds
on 16 Jul 2017

0 ‘Stadium of Tomorrow’ could include permanent residential homes, says Populous 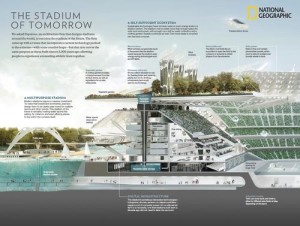 Stadiums of the future may include permanent residential facilities and places of work if they adopt an innovative, community-focused vision put forward by Populous.

The architectural practice behind the Olympic Stadiums in Sydney and London has imagined the 'Stadium of Tomorrow' for the July issue of National Geographic magazine.

Part of the vision includes making stadiums "seven days a week, 365 days a year" venues, with residential and office facilities incorporated into them.

Talking to Sports Management, Populous' EMEA managing director Christopher Lee said the notion was eminently possible and one of the most "exciting" parts of the firm's 'Stadium of Tomorrow' prospective.

He revealed that Populous was working on a UK-based sports project that included two hotels, a school with playground, an art gallery and a vegetable patch.

"We're doing a number of stadiums at the moment that are in the early design stage, developing I guess, that we're referring to as a 'superblock'.

"The idea is that you can start creating these superblocks in the urban environment, leveraging the infrastructure of the stadium - whether that's transport, energy creation, data infrastructure - and start plugging bits in and making it work 365 days a year, with people living in them and people working in them," he said.

Populous recently unveiled a project it is working on with League One football club Southend United, where residential apartments and hotel rooms could be integrated into the stadium roofscape.

Lee said that incorporating all these parts into a stadium allowed clients to "sweat the assets", particularly when building in locations with high land value.

The vision also puts ideas forward for improving the nature of multi-use stadiums.

According to Lee, multi-sports stadiums built in the mid-20th century were "a compromise for everyone", but with new technology he said two or more sports coexisting in the same venue was possible without the compromise.

For example, employing an LED surface that could change texture for different sports - astroturf for American football, grass for soccer and wood for basketball - is one solution entertained.

Lee discussed the work he was doing on the soon-to-be-built Tottenham Hotspur stadium, which will be able to accommodate a number of NFL matches. The artificial NFL field has been constructed six feet beneath the natural soccer turf pitch, which slides under the stadium for NFL matches. Both surfaces have been built at the "perfect sightlines" for both sports.

Much of the sustainable practices put forward by the vision - including PVS on the roof, wind turbines and rainwater collection - are already in use in a number of stadiums, but Lee said he expected sustainability to drive projects even more.