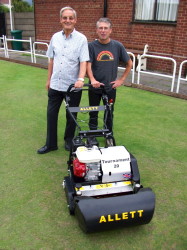 Staffordshire bowls club, Amery Unionist, is looking to take the quality of its green to an even higher level following the arrival of a new Allett Tournament 20in (510mm) cut fine-turf pedestrian mower.

Purchased as a direct replacement for the club's previous fine-turf mower which had been lost through theft, the Tournament 20 was selected following a successful demonstration carried out by Allett on the green, explained Amery Unionist's bowling secretary and co-greenkeeper, Ray Lewis.

"We had started off by looking at models with interchangeable cartridge heads but decided to go down the dedicated mower route as we already had a multi-purpose turf maintenance machine capable of verticutting, slitting, spiking and scarifying," said Ray. "The decision to look at an Allett mower came quite late in the day following a recommendation from another bowls club playing in the Staffordshire leagues. It turned out to be a very good move."

Key points on the Allett Tournament that impressed Ray, his fellow groundsman, Tony Pritchard, and other committee members during the demonstration, were the mower's ease of use, its quiet operation and very accurate cutting height setting.

"We also liked the powered turf groomer which is standard on the Tournament and lifts lateral grasses just ahead of the cutting unit," added Ray. "In common with Allett's other fine-turf mowers, the Tournament maintains a constant clip rate irrespective of forward speed. This means that the green always gets a consistent cut, no matter who is using the mower."

Within days of the Tournament going to work, Ray commented that a noticeable improvement could be seen in the run and look of the green, bringing favourable comments from leading bowlers from within the club and from visiting teams.

"Amery Unionist Bowls Club has long hosted senior and junior county matches and strives to provide a first-class and consistent surface that encourages and rewards great play," concluded Ray. "With the arrival of the Tournament, achieving those aims has become quite a bit easier and we are looking now to taking the green to ever higher levels."

Picture of Ray Lewis (left) and Tony Pritchard, co-greenkeepers at Amery Unionist Bowls Club, Willenhall, Staffs, are delighted with the improvements being made by the club's new Allett Tournament mower.