by Laurence Gale MSc
in Schools & Colleges, Rugby, and Cricket
on 08 Mar 2013

Stamford Endowed Schools dates back nearly 500 years and offers education to boys and girls, ages two to eighteen. It has solid academic foundations and a strong reputation for sporting excellence.

Sport is an important and integral aspect of life at Stamford School through the curriculum, extracurricular clubs, the house system and representative sport, so it is not surprising that they invest heavily in their sports facilities.

The schools are in a privileged position to enjoy extensive on site playing fields, squash courts, a well equipped sports

hall, floodlit tennis courts and astroturf, along with their latest investment, a new sports centre and memorial pool.

The new £6.1 million facility - SES Sport Centre - opened its doors to students, staff and parents in June 2012, and was officially opened by Lord Sebastian Coe on 30th November and offers a state of the art fitness suite, 25m indoor swimming pool, gymnasium and a hospitality area. There is also a large south-facing spectator terrace covered by an overhanging roof, giving a prime view of the main sports pitches.

The gleaming new gym houses forty pieces of Life Fitness equipment which includes the Elevation Engage cardiovascular series as well as Signature Strength and Hammer Strength equipment. The gym is open to sixth form students and will enable sports teams to train ahead of big fixtures. 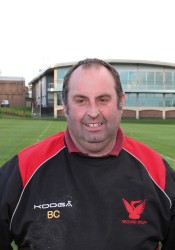 All the schools' sports playing pitches are managed by Bob Carder who has been at the school for eight years, having previously worked at Shrivenham Defence College as Head Groundsman and Site Manager, and at English Landscapes in Milton Keynes as a Groundsman/Supervisor.

Bob is very much a hands-on Head Groundsman. Mind you, he needs to be having only six full time staff to look after three school sites, with three of them designated gardeners! Luckily for Bob, the gardeners do help out on the sports fields if needed.

Stamford Junior School's extensive grounds include an artificial pitch for hockey and tennis, and hard courts for netball and tennis, all of which are floodlit. The well-maintained pitches for rugby and soccer convert to cricket and rounders pitches and a 400 metre athletics track in the summer term.

The first team square has fourteen wickets, whilst there are seven on the second team square.

All the pitches are soil based with no drainage. Bob is reliant on a robust maintenance programme that involves a healthy aeration programme. He calls upon Worth Drainage and Rick Webster Grounds Maintenance to help carry out deep aeration/vertidraining in September or October on all his grassed areas, including both the cricket squares.

Last year's cricket renovations on the first team pitch involved scarifying in four directions down to a depth of 5mm, topdressing with Ongar loam (ten bags per pitch) and overseeding with twelve bags of MM50. Two bags of pre-seed fertiliser were also added to give the new seed a helping hand. Once the seed had germinated, the first cut was carried out with Hayter Harrier pedestrian rotary mowers. A spray for worms was then carried out.

On the second square Bob again scarified in four directions, to a depth of 3mm this time, before topdressing with Ongar loam (ten bags per pitch). Barenbrug Bar Extreme rpr seed is being used basically, he says, to see how well it compares to the Limagrain MM range.

Rugby pitch renovations are undertaken during the Easter half term. All the pitches are scarified using a Rytec tractor mounted scarifier, then one of his contractors comes in to verti-drain. If there is any money left, the two main rugby pitches are topdressed. The 1st XV and 2nd XV pitches are overseeded with MM60 (twelve bags per pitch); the remaining pitches are overeeded with ten bags of MM60.

An application of granular fertiliser is applied to all pitches, once the new seed has established, to help promote growth. The pitches are mown two or three times a week using a tractor mounted Trimax ProCut rotary mower, set at 30mm for the rugby playing season, and lowered to 15mm through the summer months.

Bob also uses his chain harrows and dragbrushes on a daily basis through the playing season to repair and restore levels after matches. This also stands the sward up and gives a nice striped finish.

Most of the pitches are used on a daily basis for training and lessons, with matches primarily being played on Wednesdays and Saturdays.

During the summer months, the 2nd XV rugby pitch becomes part of the 1st XI cricket outfield, the sports pitches are again cut two or three times a week using a Ransomes 213 triple cylinder mower, but the height of cut is lowered to around 15mm depending on the weather and ground conditions.

Like many independent schools, the cricket calendar is very busy with over fifty matches being played on the main square and nearly half again on the second team square.

Pitch preparations are centred around a seven to ten day prep to produce a match pitch but, again, this is very much weather dependant. Having only a small team, moving ground sheets and covers around takes a lot of time and effort.

When it comes to marking out the school's three 400 metre athletic tracks, Bob get a little help from Sports and Courts from Leicestershire, who also help to mark out the tennis courts on the artificial surface for the summer months.

There are a number of hard surface tennis courts and synthetic pitches to maintain, ensuring they are kept clean and brushed on a regular basis. Other jobs include maintaining a variety of ornamental areas, lawns and shrub beds, along with a daily litter pick of the whole site.

Bob reports to the school's recently appointed Estates Manager, Jason Robb, who came from St Albans School in Hertfordshire and understands only too well the benefits of investing in sports pitches so, hopefully, between the two of them, the school grounds should be in good hands.