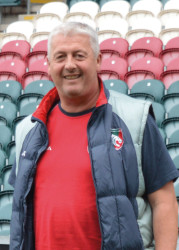 Alice Northrop continues her somewhat occasional tour of Premiership rugby grounds by visiting Welford Road, home of Leicester Tigers, where she finds Head Groundsman Steve Packwood in 'chilled out' mood, despite extensive work being undertaken to build a new stand

Another Pitchcare issue, another rugby stadium ... I could definitely get used to this! For this issue, I went to visit Steve Packwood, Head Groundsman at Welford Road, home of the Leicester Tigers, amidst the redevelopment of the stadium's West Stand.

I do enjoy exploring Premiership stadiums, and I am happy to report that Steve very much obliged, even walking me around the prehistorically basic changing rooms, complete with fifty year old benches - a set-up that we weren't sure the Stade de France team would take to when they turned up for a game on Friday, along with their entourage.

Steve (46) will have been with Leicester Tigers for twenty-five years come next August. Having studied at Brooksby Agricultural College in Melton, he went straight into a job looking after the local council's sports pitches, before he applied for a job with Leicester Tigers. He started off at the training ground, which was new at the time, and soon progressed into "doing it all".

Nestled in the middle of a busy one-way system, the stadium will soon reach a capacity of around 26,000 when the new stand is complete (the stand will add another 3,000 seats). But, when Steve first started, the Tigers were amateur: "It's changed a lot over the years," he says. "The biggest changes are the daily use. They train more or less every day of the week, sometimes twice a day. So there is a lot more work that needs doing at the training ground."

"Alternatively, if there is a lot that needs doing at the training ground, we will all go there and work. We are quite a close knit little team."

I ask him how he gets on with the players: "Oh they're fine. They are a really good bunch to be honest. Everyone is really quite friendly here.

There's not many fall outs!" Which is a good thing considering the pressure certain traditions put on the ground staff. "The team will always train here the day before a game. It's tradition. It's been happening for years," Steve tells me, "But, to be fair, when the weather is bad during the winter we have a tent covering the pitch and you know the players will stay at the training ground if the tent is on because they know it's a massive job to get it off."

The pitch gets good airflow and the drainage is very good, which have probably been big factors in the lack of disease and problems that the pitch suffers from. The only "slight problem" that Steve and the team get in the winter is over by the far stand: "the sun rises and sets behind it, so it gets no sunlight for a good four months. It's always that couple of degrees colder, so we have to spend a bit more attention to that, especially in the run up to a game, so it doesn't freeze etc."

The team will put the covers down two days before a frost comes to keep a bit of warmth in the soil, as well as the tent. "We've never had a game called off, so we have always been good at sorting that out."

Steve will go to the stadium first thing and then head over to the training ground, which is just four miles away. They also have a little project going on at the moment; "another training ground that we will maybe move to, so we are doing little bits up there. Sometimes I go up there just to see how things are."

At this time of year, the team do a lot of aeration work, and divoting is something that also takes up much of their time. This is something that Steve is very much looking forward to saying goodbye to if finances allow the installation of a new Desso pitch next season.

The current pitch is Fibresand. "To be fair, for a natural soil pitch, it does stay in pretty good condition. You never have any problems with flooding or anything," Steve says, "But we've got to move with the times I think now. Desso is the best thing since sliced bread. They're incredible, they really are."

They will work with Hewitt Sportsturf on the pitch installation as they already have a good relationship with them: "We have been associated with them here from when they first started, so they always come and do work for us and help us out. They are one of the best you can buy. They look after us really well, even though we are a small club, in comparison to some; I think they did Arsenal's training ground for millions. We are talking a few thousand here, but they still do the same job for us as they would anyone else."

With regards to machinery, the approach is a different story. When the team know what they need, they shop around to find the best deal. The Dennis Premiers that they have at the ground are a favourite of Steve's, "The finish you get with a Dennis is really good, especially at the start of the season, cutting it close with a Dennis does a fantastic job. Also, because it's a natural soil base, you don't want to be driving on it too much. Although that may change if we get a Desso. I may invest in a ride-on mower as well!"

Last year, the stadium's pitch was completely ruined by a stage that was set up for a two day concert; something the club had never done before. "We had artic lorries on there, and trucks, it was just horrendous," Steve tells me. Despite reassurance from the companies that provided the boarding etc, the stage ruined the pitch to the extent that it had to be dug out and turfed before the season started; "there just wasn't enough time to build it up like the rest of it. We may not have started the season if we hadn't done it." But it didn't quite cover the damage: "I mean the turf looked great the first few weeks but, as soon as the weather changed and the turf started to get a bit wet, it just held the water. We had a good 50-60m that was just like blancmange. It was sodden." So, in the summer, the turf was taken back up, the subsoil broken down, everything was rotovated to about a foot deep with Fibresand, and then it was built back up to the same as the rest of the pitch.

"Touch wood, it has worked this season. But we won't be having any more concerts!"

The stand redevelopment, however, couldn't be further from the concert debacle, by the sounds of it. The Tigers have been working closely with architects AFL and contractors Buckingham on the development. The stand will not only add 3,000 more seats, but will also house a premium season ticket lounge known as The Clubhouse, as well as offices and a public concourse. I ask Steve whether they have had a lot to do with the building of the new stand: "We do, to be fair. We speak to them a lot. The builders are quite a good and helpful bunch."

Steve and the team have had no access in and out of the grounds with the machinery since the demolition started at the end of last season, so working with the builders has been a big part of getting anything done, "They will pick up a piece of equipment from outside the grounds and bring it in on a crane. They have been really helpful," he tells me. However, the time it takes to do things is a bit of a pain: "It can be frustrating if you just want to get on, because you have to spend the next hour waiting for it to be brought in. Then you've got to work out when you can get it out of the ground because, on a match day, all the kit has got to go."

Steve has a lot of praise to give to the builders with regards to how they clear up before a match. "It's incredible how they do it on a match day. They get it totally cleared and actually leave it looking really smart for the match. They probably have double the amount of men there before the match day, just to clean it all up."

The work also started from the inside so as to keep disruption around the stand to a minimum. The new build is right next to the main road, and I could see as I drove past how little mess the building work had caused.

The only concern for the pitch from the building work is the annihilation of the dead ball zone because they have had to put a roadway in to build it, which Steve seemed much too calm about. "It can't be helped! And they have, to be honest, caused as little damage as they can." I ask him what he will do to the ruined turf when they leave. "I don't know yet, I will just have to see when the time comes. I don't want to think about it."

As we part, I joke that he is way too easy going for a groundsman working around a building site. "I used to moan, but I've stopped. As you get a little bit older, there's no point. It doesn't solve anything, it doesn't change anything," he says. So has he mellowed in his twenty-five years? "To be fair, I think I have!"

Welford Road's MET-Rx Stand is located on the north side of the stadium and is home to 10,000 supporters, including the 1,000-seat Premiership hospitality suite, comprising 1880 Club, Legends and Honours and The Final Whistle bar.

Steve told me that this stand is the second largest single-tiered stand in the country (the first is at Anfield).

The pitch has been lengthened by 6m since last season, so that each dead ball zone is 5m. It has also been widened by 2m. With the same being done to the Desso training ground pitch. This was the coach's ask.