0 Stand up and be proud! 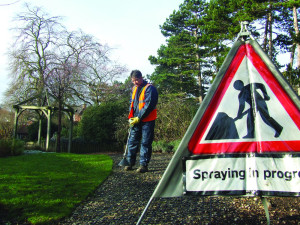 I recently watched a game at Anfield - what a sight to behold with waving banners and scarves and everyone at the Kop End standing and being proud of their team.

That scene is (of course) repeated across many sporting venues, even at my team Nottingham Forest! It got me wondering about how proud are those who work in the amenity sector, especially those involved with weed, pest and disease control, producing excellent pitches, well presented parks, clean streets, safe transport networks and more.

I am old enough to remember watching football at the highest level played on pitches akin sometimes to ploughed fields in wet weather. How the wonder who was Tom Finney, a man I am proud to have known, played such wonderful football on some of these pitches, I will never know. Nowadays, the modern supporter and participant expect perfect pitches, beautiful golf greens and the like. The commuter may complain about litter, but he or she takes it as norm that the streets will be regularly cleaned, pavements kept free of weeds and rail travel, whilst disrupted by other things, will not be held up because of too many weeds on the line!

Promoting ourselves
So do we need to promote ourselves better? Do those who maintain amenity surfaces to the standards expected need to stand up and be proud? When I took up the role as independent chairman of the Amenity Forum in 2009, I recognised a key first priority was to inform more people what the amenity sector was and did. I was often amazed at how many people at key levels just seemed unaware of the importance of our sector. Yet, we are often at the front line in terms of the public, undertaking a really important and often crucial role. 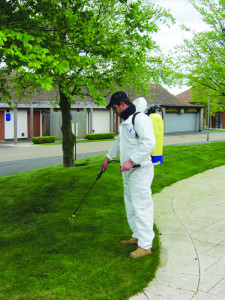 We suffer certainly by being so diverse. I often say that we have more branches of activity in our sector than blades on my Swiss army pen knife. This does not help us sometimes in creating a unified voice and profile, but it emphasises why we need to put great effort into it.

Getting engaged
This is why, and I guess you might expect me to say this, that everyone involved in weed, pest and disease control in the amenity sector gets behind and fully supports the Amenity Forum. We are an organisation established to lobby for and profile the sector, to promote best practice and ensure that we are seen to operate at the highest standards. The strength of the Forum is in it being a non profit making voluntary initiative, funded by its members, so the industry can drive and influence change. This is far better than having it imposed upon us by others who inevitably have less understanding of our sector. Through our activity, we issue guidance notes, run workshops, issue briefings, take part in consultations and act as the voice for the sector on weed, pest and disease control matters.

Equally it is important that, just as for a sports team, all of us demonstrate real professionalism and commitment to doing our jobs at the very best standard and, yes, being proud of what we do. Recently I was speaking to someone actively engaged in spraying an urban green area. When I approached, he was immediately suspicious and concerned. Whilst understandable, I wonder if the opposite might apply. Perhaps, along with that sign saying spraying in progress, there was promotion of why, to provide safe and clean surfaces for the public and landscapes to enjoy. We are undertaking a vital task important to everyone.

An integrated approach
The current emphasis is rightly on integrated control, making use of all methods available for weed, pest and disease control - mechanical, cultural, biological, chemical and genetic. The emphasis is upon effective and appropriate control for individual situations. Of course, to many in our sector, this is already practice but perhaps here lies another item for us for us to inform and be proud. We need to ensure all decision makers base decisions on facts. I recently spoke to an organisation operating closely with the public who was considering not using pesticides on its premises - they accepted that there was no real base for this and both costs and effectiveness may be impaired, but they were concerned about public opinion. I am pleased to say that, after discussion, they decided another direction, emphasising their credentials as appointing best practice amenity assured contractors, adopting an integrated approach and committed to providing the very best outcomes in an effective and safe way. 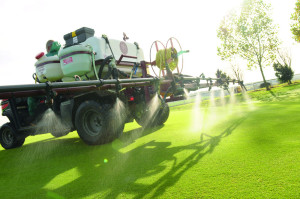 Staying in control
On October 16th, the Amenity Forum is holding its 2014 conference and exhibition at Leicester City Football Club. The conference theme is 'Staying in Control'. There will be much to see and hear with updates on policy changes, a debate on water and pesticides, implementing integrated control in practice, how other European countries are adapting to the changes and more. Full details can be found at www.amenityforum.co.uk. Each year, attendance at this event has grown but we need to see even more in 2014. This will clearly demonstrate that the sector is important, cares about what it does and is proud of its activity. In 2014, it was good to hear Lord De Mauley, a Government Minister, express his great support for the Forum and this vital and important sector. We need to continue to press that case, so I do hope as many as possible will be there on October 16th, waving our 'banners' and standing up and being proud of our vital and important contribution to the UK economy.

Bob Dylan once sang 'Times they are a changing'. Well, that is certainly the case but, with it, is opportunity. Let us stand up and be proud.