With increased exposure comes greater scrutiny of the quality of these facilities, with doubters waiting in the wings ready to pour scorn on the suitability of synthetic turf for anything beyond a kick-about in the park 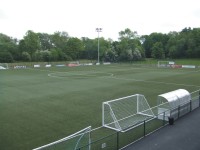 3rd Generation (3G) synthetic turf has certainly made its mark in the sporting world. Since the introduction of the longer pile, rubber-filled pitches in the mid 1990s, attitudes towards playing on synthetic grass have evolved from openly hostile (think Luton Town and Queens Park Rangers in the 1980s) to, if not all-embracing, certainly more accepting and even positive.

Designed to replicate the playing characteristics of natural turf more closely than ever before, 3G carpet systems are being increasingly adopted for use at varying levels of the game by the Rugby Football Union, the Football Association and even FIFA, thereby propelling artificial grass pitches to the international stage.

With increased exposure comes greater scrutiny of the quality of these facilities, with doubters waiting in the wings ready to pour scorn on the suitability of synthetic turf for anything beyond a kick-about in the park. It is, therefore, encouraging to note that sport's leading national and international bodies understand the importance of continued maintenance to ensure that artificial pitches offer a consistently high level of playability over a number of years. 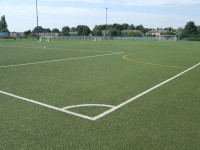 In its published document, 'Maintenance of an artificial turf field', FIFA acknowledges that little or no maintenance on a synthetic sports surface will affect its overall playing performance, longevity, safety and aesthetics. Equally, a correctly maintained artificial facility can be an aid to success, as Welsh Premier champions, The New Saints, have found; having achieved double success in 2009/10 with wins in the league and cup, the Oswestry-based club and their synthetic turf pitch are soon to embark on a European adventure in the Champions League.

What, then, is the secret to boasting a successful 3G sports surface? Here, in this article, we explains how a regular programme of effective maintenance techniques can help you achieve an artificial pitch that FIFA would be proud of.

The basics of maintenance

To get to grips with the essentials of 3G pitch maintenance, it is important to understand the unique construction of these carpet systems that enables them to replicate natural sports surfaces. Playing characteristics, such as ball roll and bounce, stud slide and shock absorption, are generally considered to be improved by the carpet's longer fibres (around 40-50mm) and cushioning rubber infill. Logic dictates that these features must, therefore, be preserved to allow the pitch to continue offering the same high standard of play to end users.

This can be achieved with regular decompactions to agitate the surface and remove contamination, simultaneously lifting the carpet fibres and loosening the rubber particles, which become flattened and compacted during play. Keeping the pile upright not only protects the carpet fibres from wear, it also preserves the playing characteristics and restores the aesthetic qualities of the pitch. Loosening the rubber infill, meanwhile, helps to improve drainage and control the feel of the surface underfoot, whilst allowing for infill levels to be regulated at repeated intervals.

The ultimate aim of regular maintenance must be to preserve the playing characteristics and life expectancy of an artificial pitch and, to achieve this on a 3G pitch, regular decompaction works are essential.

However, decompaction is, by no means, the only maintenance process required to keep a 3G pitch in top condition. Regular maintenance encourages familiarity with the way a pitch reacts to factors such as player footfall and natural weathering. 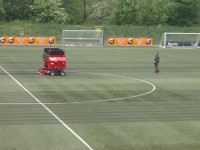 Rubber infill is removed from a 3G surface on a daily basis, and frequent monitoring can help to ensure that rubber levels and distribution are assessed and corrected before infill displacement is able to weaken the carpet fibres, increase the rate at which the carpet wears, compromise the playing characteristics and shorten the life expectancy of the surface. As a minimum requirement, rubber levels must be topped up every one to two years.

As with any artificial surface, combining daily and weekly in-house routines with specialist, deep-cleaning works is the key to a successful maintenance programme. Dragbrushing should be carried out, at least once a week, to maintain a consistent distribution of rubber infill and raise the carpet pile. Compaction of the infill can also be reduced on a regular basis with suitable equipment.

There are various types of machinery available to carry out this function, which can be used as a stand alone item or attached to existing machinery. We can offer advice on a selection of such equipment should pitch owners and managers wish to purchase items to build upon their existing maintenance practices.

Alongside these everyday surface-based tasks, it is important to regularly remove the accrued dirt, debris and contamination that can bed in amongst the infill. Dragbrushing alone does not achieve this, so it is important that the pitch is swept, using a rotary brush with filtration systems, which lifts and clean the top layer of rubber infill before returning it to the carpet. This service should, ideally, be carried out on a monthly basis to complement the in-house dragbrushing of the surface. 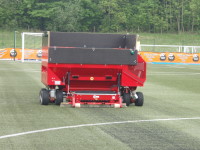 Furthermore, to ensure comprehensive decompaction and dirt removal, a more intense cleaning of the surface should be completed, either annually or as a minimum every second year. This process is designed to get much deeper into the carpet pile, removing any dust, debris and broken-down carpet fibres that have migrated lower into the rubber infill.

As with all synthetic grass carpet systems, moss and weed growth can create problems on 3G pitches and must be tackled on a regular basis. Failure to remove this material will soon increase contamination levels, leave the pitch looking unsightly and, most importantly, pose health and safety risks to players in the form of slip hazards.

FIFA and the launch of Football Turf

When maintained correctly, a 3G pitch offers a consistent playing surface for sports such as football, at all levels of the game. The benefits of artificial turf, in climates where natural grass is unsustainable, and the increased amount of use such facilities can support in comparison with natural pitches, led to FIFA launching their Quality Concept for Football Turf in 2001. Identifying a growth in popularity of synthetic sports pitches, football's world governing body wanted to promote a recognised international standard for artificial grass, or 'Football Turf'.

The manufacture, installation and maintenance of Football Turf is subject to intense scrutiny, and a synthetic pitch must pass a series of laboratory and field tests before being awarded FIFA Recommended status. While the FIFA Recommended 1* artificial surface is intended mainly for community use, the Recommended 2* certified pitch is designed to mimic professional football surfaces as closely as possible, and guarantees an artificial pitch that can host top level UEFA and FIFA competitive matches.

Recommended 2* Football Turf must, above all, provide a consistently high level of playability throughout its life. Neglecting to properly look after the pitch serves to undermine any original investment, by shortening the projected life of the installation. Not only that, but FIFA will revoke the Recommended status of any Football Turf field that fails to meet its ongoing maintenance requirements.

FIFA is keen to stress the importance of continued maintenance in order to ensure that Football Turf continues to fulfil its strict requirements on criteria such as ball roll and bounce, stud slide and deceleration, and shock absorption.

Facility operators of FIFA Recommended 2* pitches must demonstrate to FIFA that appropriate maintenance equipment is available on site, or supply photographic evidence of such equipment if maintenance is completed by a third party, such as Technical Surfaces. 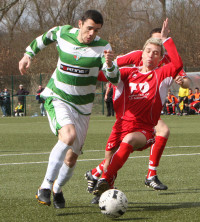 FIFA recommends a series of simple, yet effective, principles of maintaining an artificial football pitch to achieve longevity, a profitable return on an initial investment and, above all, player satisfaction. Central to this is the fundamental rule that prevention is better than the cure. This sentiment has been adopted by Welsh Premier football club, The New Saints FC, whose own 3G Ligaturf pitch is accredited with FIFA Recommended 2* status.

Installed by Polytan Sports Surfaces in 2007, the pitch at Park Hall Stadium is maintained on a regular basiswith a combination of Power Sweeps, decompactions and remedial works has helped to preserve the playing characteristics of the facility to FIFA-approved standards. While The New Saints' league record at home in the 2009-10 season (played 17, won 14, drew 3, lost 0) cannot be attributed solely to the quality of the playing surface, it does show that an artificial pitch is no hindrance to playing competitive sports, and can even be a positive factor.

"Our team enjoys playing good, technical football, so the artificial pitch is perfect for us," explains Mike Davies, Team Manager of The New Saints FC. "The surface suits our method of play and allows players to get the ball down - above all, it gives us a consistent playing field that reflects our players' abilities."

Whilst opposing teams might feel at a disadvantage playing on artificial turf, it can just as easily be argued that teams such as The New Saints face a similar, if not worse, situation when playing away fixtures on pitches whose condition is changeable throughout the season.

And it's not only on match days that the artificial pitch has proven to be a boon for The New Saints; the surface is also utilised for first-team training four days a week, and is in constant use by the academy. "Coaching the first team and also having a direct involvement with the academy means I practically live on the pitch." says Mike. "The pitch plays superbly, and allows continuous use morning, noon and night. As a business, which all clubs now are, what better way is there to generate an income stream for your club?"

The club's successful record last season saw them crowned Welsh Premier champions in April 2010, following which they were subsequently entered into the qualifying rounds of the Champions League. To be able to host matches at the highest level of European football, it is vital for The New Saints to safeguard their FIFA Recommended status and, to that end, they have recently opted to increase their maintenance contract. At the professional level, the financial consequences of a poorly-maintained pitch are clear and unequivocal, and not a risk The New Saints FC is willing to take.

3G carpet is not simply a development in the world of synthetic surfaces, it is also symbolic of a culture shift towards a greater acceptance of artificial turf in sport as a whole. As technological advances are made within the industry, so do a growing number of sporting bodies recognise the many advantages of synthetic turf, and it is testament to the constructional quality and consistent performance afforded by 3G turf that this carpet system is the one to finally bridge the gap between natural turf and the 'Astroturf' pitches of old.

As with natural grass, the good condition of an artificial pitch can only be sustained with regular care and attention throughout its life. It is essential to understand the routines and practices relevant to 3G surfaces, and utilising the services of a maintenance specialist with a working knowledge of maintaining FIFA Recommended rubber-filled surfaces, provides added peace of mind that your investment is in safe hands.

So, the secret to boasting a successful 3G sports surface?

It's no secret at all - quite simply, if properly maintained from day one, with on-hand support from industry experts, a 3G pitch will provide you with a consistent playing surface all year round.

For further information please call Technical Surfaces' National Office on 08702 400 700 or visit www.technicalsurfaces.co.uk and ask to speak to a Technical Manager.