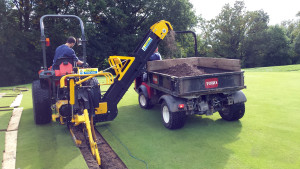 Stanmore Golf Club, Middlesex, will use its new AFT45 trencher to install modern drainage schemes in numerous greens of this stunning course.

It is among the oldest golf courses in the country dating back as far as 1893.

Alister MacKenzie, a British golf course architect whose course designs, on four different continents, are consistently ranked among the finest golf courses in the world, was employed to reconstruct the course in the 1920s.

His naturalistic approach is still reflected in the charming beauty of Stanmore Golf Club today.

Irrigation in those very early days employed the effective technique of 'puddling' (the process of lining the subsoil under the green with flattened clay) to collect water in order to irrigate gradually during the growing seasons.

The original greens at Stanmore GC employed this method and in some respects the efficiency of the method is its downfall - it retains too much water, leaving the greens water-logged during prolonged wet periods.

Now 120 years on it is the turn of Course Manager Barry Neville and his team to address the excessive moisture retention of these greens and bring the drainage up to the standards required today.

Barry purchased the AFT45 trencher so he can install drains on the greens himself. "We looked at several machines and chose the AFT45 from AFT Trenchers because in demonstration it was fast, efficient and easy to use," he said. "My intention is to introduce a herringbone system of lateral drains to ten of the greens over the next three years. We will do the work during the autumn so disruption is kept to a minimum."

Suitable for compact tractors of 20-45hp (15-34kW), the AFT45 was designed as a versatile trencher for golf courses and sports fields for the installation of drainage and irrigation systems. In Barry's case he installed lateral drainage lines at 2 m spacings at a depth of approximately 450mm.

So far Barry has completed two greens this autumn and the results are already beginning to take effect. "It's been very encouraging," said Barry. "We have noticed the ground is firmer and drier and the greens have been in constant use since they have been back in play after the drains were installed - even after some very heavy downpours."

Despite the extensive work to be carried out, the sympathetic low-impact AFT 45 trencher will ensure that the integrity of the course, as designed by Alister MacKenzie all those years ago, is maintained.

So even more golfers will be able to enjoy the views over the Middlesex countryside - while playing their best golf ever!

For information on the full range of AFT trenchers visit the website: www.trenchers.co.uk