I called in to Stapleford Park Country House and Golf Club at the request of Paul Simpson from Worth Drainage, who wanted me, not only to meet the head greenkeeper, but also to see their fleet of verti-drains operating in tandem during their annual aeration blitz of the course. Paul reckons it's an impressive sight, not unlike the mowing of the fairways at the US Open, even if it is considerably slower!

The plan was to do every inch of mown grass - greens, approaches, tees and fairways - however, with three days of torrential rain, the job had been put on hold. However, this did not stop Paul and I from walking the course and seeing the size and scale of the estate and golf course.

We walked towards the far side of the course where we were told we would find Mazz (Matthew Edge), the club's Head Greenkeeper who, along with his staff, was working on one of the bunkers. Unfortunately, it was raining so heavily we had to arrange to catch up with him in 'The Pavilion', the course's beautiful thatched clubhouse. 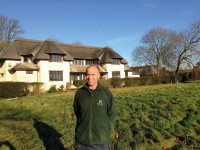 By this time, we had already spent thirty minutes traipsing around the course, before we finally found ourselves trudging up the 18th fairway towards the clubhouse like a couple of drowned rats, and looking forward to a much needed hot drink!

Surrounded by 500 acres of magnificent grounds, landscaped by Capability Brown, Stapleford Park is the perfect English sporting country estate. The estate sits in the heart of Leicestershire, near Melton Mowbray, minutes from Rutland Water.

Since Georgian times, this impressive house has been the setting for centuries of hospitality, country pursuits, fine living and relaxation. In 2000, the golf course was added to the impressive list of facilities.

The 6944 yard, par 73 course was designed by Donald Steel and, at just twelve years old, has matured very quickly. So much so that, in both 2010 and 2011, it hosted the ISPS Handa Senior Masters, in the process becoming the East Midlands first European Senior Tour venue.

We eventually caught up with Mazz in the clubhouse, where he told me that he was promoted to Head Greenkeeper in 2004. He manages a team of six - David Allen (mechanic), Steve Allen, Edward Pearson, Jon Keightley, Matthew Osman and Carel Fourie.

The greens are very large and built to USGA specification. They are maintained at 3.5mm in the summer and 5mm during the winter months. Tees and approaches are kept at 10mm all year round, whilst fairways are kept at 14 mm. The rough is mown at 50mm, and the deep rough grass areas are topped in early Spring and then cut and collected in the Autumn.

As with any golf course, bunker maintenance is time consuming but, with only forty-five on this course, they are quite manageable on a day-to-day basis. However, this winter, Mazz and his team have begun a programme of reshaping, taking the opportunity to replace the sand as they go. Other winter work will include tree maintenance and cleaning out the numerous ditches and streams.

With most of the course built on heavy clay, Mazz explained that it is important to keep the soils open and free draining, which is why he calls in Paul to carry out the annual aeration sweep of the course. This religious annual spiking is supplemented by additional aeration work, undertaken by the greenkeeping staff at various times of the year, including fairly extensive work during the spring and autumn renovations. All this is backed up with regular sarrel rolling.
Spring renovations see the greens hollow cored, scarified, sarrel rolled, fertilised, oversown with a fescue bent seed mix and topdressed (around 1 tonne per green).

Throughout the growing season, the ongoing maintenance regime consists of mowing on a daily basis, interspersed with feeding, verticutting and topdressing work on a three to four week cycle.

Autumn renovations are similar to spring but, as Mazz puts it, "carried out a bit more vigorously".

The course is still very young, and there is plenty for Mazz and his staff to undertake to keep improving both the playing surfaces and the aesthetics to ensure it remains in contention for future PGA tour events.

As for a wish list, Mazz would like the club to invest in new purpose built storage sheds and mess room facilities to replace the temporary metal containers they have at present.