by Charmian Robson
in Machinery & Mechanics
on 21 May 2020

0 Starnes Engineering gets Ease, Accuracy and Time Saving from Automation with the Foley Company 633 Accu-Pro

Starnes Engineering has experienced the benefits of an automatic relief grind using the Foley Company 633 Accu-Pro. The East Sussex company has been continually growing since it was started four years ago by groundcare and agricultural engineer, Jamie Starnes, with grinding counting as a key service over that time. 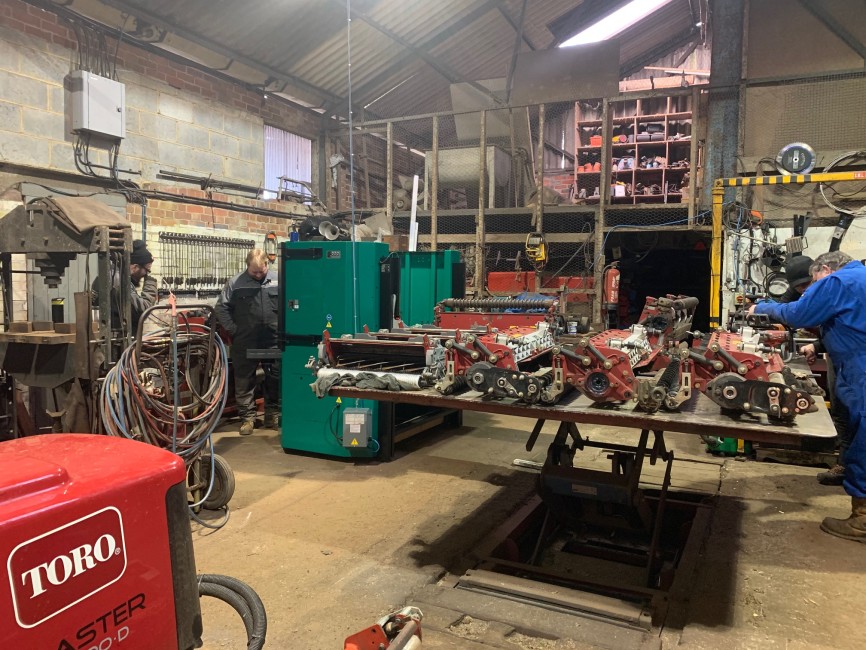 Jamie has gathered a vast amount of grinding experience within the industry, including working as tournament support at the 2015 Open Championship at St Andrews, Wentworth and The Oval. During this time, he has used an array of grinders from various companies, but the Foley 633 Accu-Pro has proven the best he's used for relief grinding.

"It's just so user-friendly compared to anything else that I've used, and I've used quite a few different makes for myself and companies at different sites," Jamie explained. "I think it's just superb, really. It's easy to use and set-up, and it's accurate with it. And the fact its automated means you can leave it to it, so you're gaining productivity time, and you're not disappointed with the results."

"Relief grinding makes such a difference to the quality of cut and the general ware of the machine, units and grass itself. It's a vital thing to do for anybody, but it is time-consuming with other machines compared to this one even with the units themselves. With different makes, you have to remove a lot of stuff from the unit like rear roller brushes for example, but on the Foley, you don't have to strip down units and take things off, you can pretty much clamp and hold down any unit with anything still on it, which is another massive time-saving aspect."

"I was looking for something that was fully automated that would speed up the whole process, and something that could be set up quickly and easily that you can walk away from when possible to do other things and make use of the time. When I've used other grinders to relief grind, I've had to stand there and manually push and pull the machine through each individual blade whereas once the Foley is set up, you can leave it."

"Once you've set it up and you know the formula from having done a unit, and you've got another five, ten or however many left to do you can more or less put them in and run through them. We've had a lot of use out of the grinder since we got it in January - at least 40 units or more. It's been used to grind Jacobsen, Toro and John Deere, so we've had a bit of everything. It is very simple to go between each brand. The machine is superb for simplicity and swapping between units. And not only for the positioning of the bench and stuff but other things like moving the motor drive from left to right. On other models, it's actually quite a paraphernalia to move it all around, but with the electric motor you pick it up and move it from one side to the other, so it's a vast improvement for ease and speed and everything like that."

Several features on the 633 Accu-Pro combine to make it a reliable and straightforward grinder. The Accu-Touch 3 Control system provides a step by step tutorial for new technicians, while more experienced operators can use the system to tell the machine what they're working on and it'll do the rest. Automatic placement features, the Accu-Reel Selector and Cylinder Height Stop, automatically locate the reel for a fast and easy spin and relief grind in one set-up and work with the pre-set relief angles to provide the hands-free relief grinding Jamie has found so beneficial.

To experience the difference of the Accu-Pro 633 or other Foley Company models, contact ProSport UK Ltd at prosportukltd@gmail.com.