0 State of our countryside: New map reveals loss of farmland

Large-scale changes to the environment of the United Kingdom, including an apparent loss of habitats and agricultural land, have been revealed through an updated national map of land cover launched by researchers at the University of Leicester together with consultancy company Specto Natura on 1 July 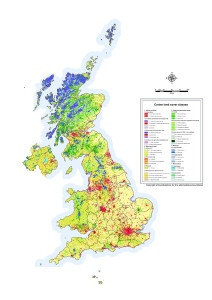 The land cover map, which examines data from 2006 and 2012, is based upon a standardised classification system of 44 land cover and land use classes which are structured in a three tier system that shows how much of the UK is made up of artificial surfaces, agricultural areas, forest and semi-natural areas, wetlands and water bodies.

The 'Coordination of Information on the Environment' (CORINE) Land Cover (CLC) map forms the central part of the European Land Monitoring Service under the Copernicus Programme. It is a European-wide project gathering together information relating to the Environment within the European Union.

Professor Heiko Balzter, Director of the Centre for Landscape and Climate Research at the University of Leicester and leader of the study, said: "Environmental information from satellites is hugely important to keep a check on the quality of life in the UK. The European land monitoring service turns satellite data into policy-relevant information. The CORINE map is the only consistent European information on land cover change that allows a comparison with our neighbours."

Professor Balzter added: "For the reference year of 2012, this is the only land cover information available for the UK. At the scale of change mapping of 5 hectares or larger, there appears to be a loss of semi-natural habitats and agricultural land. The apparent decline in wetlands is particularly concerning.

"The maps show the need for a more detailed study of the state of our countryside, because of the technical limitations of the CORINE mapping approach at a coarse spatial scale."

The changes are dominated by forest management, therefore their concentration is higher in Scotland and Wales, following the distribution of managed forest.

Forest loss: Nearly 3,000 hectares of coniferous forests were cleared for industrial development. Conversion of coniferous forest to industrial and mineral extraction sites largely relates to the erection of wind turbines in upland areas, mainly in Scotland. Wind farms fall into the industrial land cover class in the European system. The rate of conversion of land to sport and leisure facilities, mainly golf courses at this scale, continues to decline. Clear cutting of mixed forests accounted for another ca. 3,000 hectares.

The most dominant land cover type in the UK in 2012 remains agricultural land, followed by forest and semi-natural vegetation. Artificial surfaces represent 8% of the country with the majority being urban settlements.