The 2015 Edwin Budding Award, named after the inventor of the lawnmower and presented by the Golf Course Superintendents' Association of America (GCSAA) in partnership with Ransomes Jacobsen, has been awarded to Stephen Tucker, Equipment Manager at Tranquillo Golf Club at Four Seasons in Golden Oak, Florida. 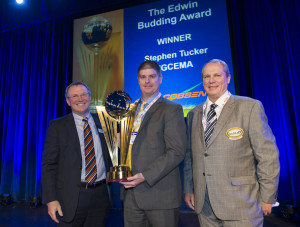 The Edwin Budding Award is given to equipment managers and related innovators, technicians, educators, or engineers from across the globe, who have made a significant impact in the golf and turf business.

Tucker was presented with the award at the British and International Golf Greenkeepers' Association's (BIGGA) Turf Management Exhibition in Harrogate, England.

"It's very humbling to be chosen for the Budding Award," Tucker said. "But I feel that I still have a lot more to do in the industry. I would also not be where I am without all the leaders and volunteers I had with me. I want to accept the award on behalf of all of those guys."

Stephen Tucker has spent more than 16 years in the industry and was instrumental in the formation of the International Golf Course Equipment Managers Association (IGCEMA) in 2007. He began by contacting other equipment managers from across the world to form an association so that the career path for equipment managers could be more than just going from job to job. IGCEMA would eventually become a partner in the annual Golf Industry Show and establish a certification programme that recognised technicians for demonstrating proficiency in six key competencies. Tucker would serve as the first president of IGCEMA and eventually become its executive director.

"Stephen truly personifies the ethos behind the Budding Award," said Alan Prickett, Managing Director of the award sponsors, Ransomes Jacobsen. "His innovative thinking helped establish a network of knowledge and camaraderie for equipment managers across the world. His efforts not only benefitted equipment managers, but the facilities they serve and the industry as a whole."

As IGCEMA flourished it became apparent that it would need to consider hiring paid officials to increase the scope of its offerings to equipment managers, as its growth had outpaced its resources. Following a meeting with GCSAA Past President Patrick Finlen, certified golf course superintendent and general manager at the Olympic Club in San Francisco, the answer was clear.

"It was going to be difficult to push ahead, so we had to ask the question: What was best for equipment managers moving forward?" Tucker said. "GCSAA was the answer to that."