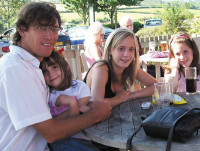 Steve Hesk, Sports Turf Manager at Blackpool Council, is a Man City fan but appears to be rearing a netball team!

Who are you? Hi, I am Steve, Steven or Stephen Gary - depending upon whether you are talking to me, e-mailing me or telling me off. I work for Blackpool Council, as the Sports Turf Manager following a recent restructure. I was the golf course manager for five years before this.

Status? Married to Steph, 16 years and we have three daughters, Mikkala 14, Isabella 12 and Sabrina 6 (nearly 7 as she keeps telling us).

Who is your all time hero? Former Manchester City player Colin Bell.

What is your dream holiday? I spent a year in Florida during the 80s and it would be great to take the family back to enjoy Disney, although flying through the Grand Canyon would be a close second.

What annoys you the most? People who drive with their fog lights on when it's not foggy or who don't indicate when turning. Mark Lawrenson, who always predicts Man City to lose (have you guessed I'm a City fan yet?).

What would you change about yourself? My teeth. Kids, look after your teeth, no replacements, no second chances.

Who wouldn't you like to be? Mark, my boss!

Favourite record, and why? Dark Side of the Moon by Pink Floyd, because it's marginally better than Wish You Were Here!

Who would you choose to spend a romantic evening with? If my wife is reading, then it would be you darling, if she isn't, Jo Guest!

If you were to describe yourself as a musical instrument, what would you be? A Saxaphone.

What law/legislation would you like to see introduced? All dogs banned from parks, sports surfaces and recreation areas for children, the level of dog fouling is absolutely shocking. Bring back dog licensing and use the funds to employ dog wardens.