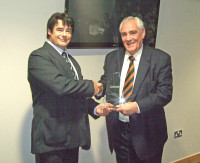 Born in Glamorgan in 1949, the son of a former hurricane pilot, he was destined for a career in the RAF. However, a chance meeting at Edgbaston in the winter of 1966 - when he was watching a friend rugby training and was offered a bowl in the nets to keep warm - put paid to a career following in his family's footsteps.

He joined the groundstaff and went on to play 127 games for his adopted county taking 270 wickets for an average of 30.78. In 1994 he took over from Andy Atkinson to become head groundsman before retiring at the end of this season, following 45 years of outstanding service to the club.

Unfortunately he was unable to be present at the awards ceremony, held in the Committee Lounge at Edgbaston recently, as he had already begun the world travelling he had threatened to do on numerous occasions. The award was accepted on his behalf by former England and Warwickshire cricketer and current Warwickshire committee member John Jameson, MBE.

Chris Wood, pitches consultant with the England and Wales Cricket Board, who presented the Ransomes Jacobsen award read out a letter of appreciation in which Steve Rouse said that he was "very humbled by this award and thank you to everyone for your support throughout my career."

In his typical forthright manner he also had a few words of advice for the assembled groundsmen on the vagaries of doing the job they love.

"You will be put under more and more pressure from players, coaches, chief executives and the press. I will give you a bit of advice, you can take it or leave it, but look them straight in the eye, stand your ground and tell them straight 'I'll do it my way'; I did and it got me through. Thanks for this award and good luck."