by Steve Castle
in Industry News, Training & Education, and Golf
on 17 Sep 2015 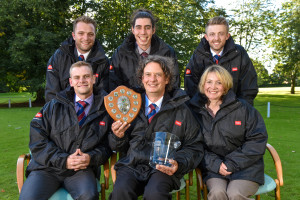 He wins the fabulous first prize of a Toro Scholarship. This life-changing, all expenses paid eight-week trip includes a residential turf management study course at the University of Massachusetts, USA early next year. There will also be visits to the Toro Company HQ and the Golf Industry Show in San Diego, California.

The other finalists - Stefan Carter, Assistant Greenkeeper at The Wentworth Club, Jon-Jo Pitts, Deputy Course Manager at Royston Golf Club and David Stewart, Greenkeeper at Walmley Golf Club - will be given BIGGA membership for one year following on from the expiry date of their current membership.

Day two of one of the industry's most popular and enduring competitions began with the final six completing a 30-minute multiple choice quiz on a huge variety of subjects ranging from health and safety to CPD.

They were then given an essay question to complete focusing on their career aspirations, then interviewed individually by an industry panel.

Winner Steve said: "It's such an honour to win, I know I was up against some tough competition. It's been a great experience from start to finish, and I feel I've also made some friends. All six of us have got on really well.

"America is going to be amazing, I'm looking forward to the turf management course, the GIS and seeing the scale of the Toro HQ.

"I'd like to thank Rushmore Course Manager Jaime Acton, the General Manager Declan Healy and the whole team for their fantastic support. Also, thank you to Nick Lush, my tutor at Myerscough College, my wife Rachael for her constant encouragement, the sponsors Toro and everyone at BIGGA House for making me so welcome. BIGGA's South West & South Wales Regional Administrator Tracey Walker was also instrumental in setting up the public speaking and presentation course at Hockley Golf Club I attended recently which was a great confidence booster heading into the final."

BIGGA's Head of Member Learning Stuart Green was part of the initial panel who held the regional interviews to whittle down dozens of nominees to the final six.

Stuart added: "Toro Student Greenkeeper of the Year is a wonderful competition and once again it was a pleasure to meet six enthusiastic, engaged and passionate greenkeepers.

"It was a very tough decision coming up with the final six, let alone deciding who would win overall! Congratulations to Steve and all the finalists, it's a terrific achievement just to reach this stage of the competition. Steve will have a superb experience in the States which is a fabulous personal and professional development opportunity.

"Everyone at BIGGA would also like to thank the sponsors Toro for their continuing support of the contest which is now in its 27th year."