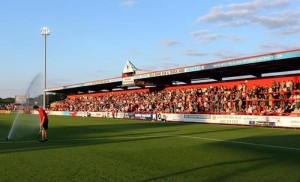 Stevenage Football Club has offered fans the chance to invest as it attempts to raise £500,000 to build a new stand for its Lamex Stadium.

Supporters and interested parties will be able to make £500-plus donations in exchange for a five-year mini-bond.

Donors will be paid their money back at the end of the five-year period, making 4 per cent interest per annum every year until then.

There is also an option to take club credit instead of cash, which generates 8 per cent interest per annum, although this can only be spent in the club shop, on food and beverages, or on hospitality packages.

The crowdfunding platform has been set up by Tifosy, which was set up by former Chelsea and Italy footballer Gianluca Vialli.

The amount generated via crowdfunding will be added to a £450,000 grant provided by the Football Foundation, which distributes money via the Football Association, the Premier League and Sport England for facility projects.

Stevenage chair Phil Wallace is hoping the work on the North Stand is completed in time for the 2018/19 season. The new stand will be a 1,600 modern all-seater facility.

"I want to do this together with the fans and the community, standing shoulder to shoulder for Stevenage," said Wallace.

"Stevenage is a community club and it's important we keep it that way; that's why we're offering fans and the local community the chance to invest in the club, to help us grow but also get a benefit from their investment."

He added: "Doing it this way means there is a financial benefit to the people who invest as well as there being emotional reasons to support the club the love. And in addition, fans will be able to enjoy the new stand with great facilities for all."