0 Sting in the Scorpio tail for stubborn Fusarium 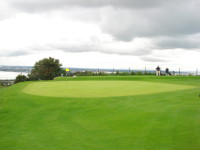 Fusarium patch disease caused by the fungus Microdochium [Fusarium] nivale made full use of one of the wettest seasons on record in 2007. It presented greenkeepers across Ireland with fast-moving and stubborn disease on their greens peaking during November and December.

Typical was Howth Golf Club 6 miles north of Dublin where head greenkeeper Darren Ward was faced with daunting disease and the prospect of a none too restful and peaceful Christmas. Every green on this 18-hole course was showing heavy and still spreading Fusarium infection and damage by late autumn.

The very wet spring and summer of 2007 and high position of the course, making it prone to early morning mists, allowed the moisture holding clay-based greens to provide an ideal bed for Fusarium.

Darren had already tried a range of different fungicides but all failed to halt this fast moving infection or shift the stubborn scarring from his greens "Not only were these futile attempts becoming time-consuming but costly too, with absolutely no success or reward" says Darren. By late November Darren was looking for 'peace of mind' over Christmas by halting the disease in its tracks and restoring healthy greens for members and players in the New Year.

Now looking for a fast-acting and long-lasting solution, Darren called in Yvonne Ritchie Sales manager at Spray-Chem Golf to recommend a fungicide treatment programme. Yvonne said "by late November the disease had built up to extraordinarily high levels. All greens were scarred and new infections were still spreading into healthy areas of turf. On some greens over 25% of the playing surface was affected by Fusarium Patch," says Yvonne. 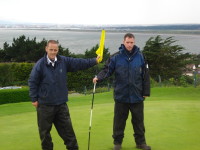 Yvonne recommended ScorpioÒ a mesostemic acting strobilurin fungicide from Bayer Environmental Science. ScorpioÒ contains trifloxystrobin (500g/kg; 50%w/w) formulated as a water dispersible granule. According to Bayer, ScorpioÒ provides both preventative and curative action to give up to 56 days of control.

Excellent rainfast properties (deposits secure within 2 hours of application) provide long residual activity and up to 8 weeks of control. Darren had never used a strobilurin fungicide before but was excited at the prospect of fast initial action with long lasting control. And he was not to be disappointed.

He duly purchased three 250g packs of ScorpioÒ and applied the fungicide on December 5th 2007. Using a Gambetti sprayer trailed on a John Deere 4115 Compact Tractor he applied the recommended rate of ScorpioÒ in 400 litres water. This was sufficient to cover all 18 greens plus putting and chipping greens. The 8-metre sprayer boom accommodated 16 flat-fan 110º red nozzles spaced at 0.5 metres.

"The appropriately named ScorpioÒ certainly had a 'sting in its tail" says Darren "because disease spread was halted within days of application, allowing the grass to grow back and the greens to recover quickly." But the thing which really amazed Darren was duration of control because he achieved more than the standard 8 weeks. The rehabilitated greens were still pristine well into the New Year and past 'Candlemas' (February 2nd 2008).

"There's no way I am going to get caught out this year" said Darren who plans to spray ScorpioÒ in mid September 2008 just before hollow-coring the greens. Yvonne Ritchie has recommended application 4-5 days prior to hollow-coring for Scorpio's preventative action and cover for the turf during this high stress period.

ScorpioÒ will provide the standard 8-week period of control taking Darren up to December 2008 before he needs to think about further protection. This will be provided by Chipco Green (iprodione) the number one contact fungicide by Bayer, leaving the second application of ScorpioÒ for spring 2009.

This Bayer fungicide programme will give Darren excellent disease control throughout this high pressure period. Due to Scorpio being taken in through the plant leaf it can be used in cool conditions, unlike some other turf fungicides. This makes it extremely easy to fit into a disease management plan for optimum results.

Yvonne Ritchie was clearly pleased for Darren and with the excellent results of her recommendation. "With Fusarium now building up through autumn and peaking in November/December I would recommend green-keepers apply ScorpioÒ well before Christmas, to get 'peace of mind' for the holiday season and maintain a pristine playing surface through into the New Year and up to early spring", Yvonne says.

An exceptionally wet 2007 clearly aggravated Fusarium patch causing the disease to build up late in the year, especially in locations that are inherently prone to this destructive disease. By August 2008 the weather in Ireland was looking like a repeat performance of last year.

Howth Golf course with its clay based water-holding greens and high situation encouraging mist is prone to Fusarium.