by Manda Sansom
in Chemicals & Fertilisers, Conservation & Ecology, and Consultancy
on 14 Jul 2014

Common Ragwort, or Stinking Nanny as it is sometimes known, can be a major headache for amenity managers, carpeting neglected corners and popping up on open spaces with its yellow flowers in early summer. It is of particular concern since it is scheduled as an injurious weed under the 1959 Weeds Act.

Landowners have a legal obligation to prevent the spread of Common Ragwort. This Act was amended in 2003 to enforce adherence to the Ragwort Code of Practice. Defra can take enforcement action where Ragwort poses a high risk to horses, the production of forage or agricultural activities, so groundsmen and greenkeepers, especially in rural areas, need to keep a special eye out for it.

The Code of Practice places the onus of responsibility for landowners and managers including Local Authorities, railways, Highways Agency etc. to have Ragwort Control Policies in place. 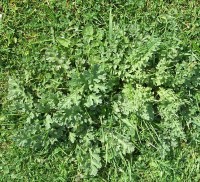 They should assess the risk on land that they own and implement control policies on any identified as medium risk. Immediate action should be taken on any land identified as being high risk. Failure to follow the code may be used in evidence in prosecution under the Weeds Act. Copies of the code can be downloaded from the DEFRA website: http//:defra.gov.uk/rural/horses/topics/ragwort.htm

NB: The Ragwort Code of Practice does not apply to any other species of Ragwort.

There is a further species known as Oxford Ragwort (Senecio squalidus) which is thought to have escaped from the Oxford Botanic Gardens in the 18th Century and is shorter than the Common Ragwort at only a third of a metre in height. This species tends to colonise waste ground and railway embankments.

Ragwort is poisonous to cattle and horses as a growing plant when conserved in hay or silage, or when dying after cutting or spraying. The poison is an alkaloid, which accumulates in the liver and, though only small amounts may be consumed at a time, the effects may ultimately be fatal.

Dead or dying plants become palatable to stock, whereas live ragwort is not eaten, so stock exclusion is particularly important when controlling Ragwort by whatever method.

Ragwort is most commonly found on neglected or overgrazed pasture, particularly on light land, but it is increasingly found invading all types of pasture. The primary source of contamination is seed spread on the wind from uncontrolled plants on neighbouring land.

Once established, the ragwort is naturally a biennial plant forming a rosette of leaves close to the ground in its first year, running to seed the following June-October and then dying. However, cutting or incomplete pulling can cause the perennation of the plant such that it branches and becomes enlarged and emerges for many years.

A dense grass sward can prevent a serious invasion by suppressing the seedlings.

On pasture land, mixed grazing regimes, especially with horses being selective grazers, are often recommended. Sheep will eat young shoots in the spring and can tolerate a certain amount of the alkaloid. This can help to control the weed, but great care is needed as even sheep have been killed by it.

Cutting or hand-pulling after rain at the flower bud stage is an alternative method. Foliage must be removed or burnt before stock return to the field.

Whilst this prevents seed return, it often has no other benefits, as a fragment of root left in the ground will regenerate into a new plant.
Always wear gloves when handling plants, even when they are dead as the poison may enter the bloodstream through skin.

Herbicides: Herbicide-treated plants become more palatable as they die back and, as ragwort is poisonous, dying plants must be removed from the field or stock excluded until the plants have completely degenerated, (at least four weeks).

Selective herbicides like MCPA or 2,4 D can be used to control Ragwort before the flower bud is formed. Grass is unaffected, but stock must be excluded at a crucial time of year for grazing and, if the plants are still at the rosette stage, it is not practical to remove them to allow stock to return to the field sooner than four weeks. Use of these hormone-type weedkillers is often not advised in environmentally sensitive areas or near watercourses.

1) As a spot treatment with a carefully directed knapsack sprayer fitted with a sprayer hood or guard. Apply Roundup Pro Bio at a rate of 5.0 l/ha or Roundup Pro Biactive 450 at 4.0l/ha. There must be enough actively growing leaf above ground to absorb sufficient product to kill the underground roots. Avoid spraying whilst the stem is extending rapidly as the sap flow is against the direction of movement down to the roots and poor control may occur.

Apply from when they have produced a flowering stem, but before seed are set. Plants in the first year rosette stage may also be spot treated, but they may be hard to spot amongst taller grasses.

Ragwort plants can be cut or pulled five days after spraying, allowing grazing to recommence. Any remaining roots will die off - always wear gloves when handling ragwort.

3) As part of a reseeding programme to establish a new grass sward. Roundup is applied overall to destroy the whole sward prior to re-seeding. 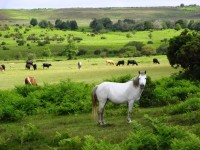 The Crown lands of the New Forest National Park are managed by the Forestry Commission, and with considerable populations of ponies and cattle grazing in the forest, controlling ragwort is an important task.

The Forestry Commission's Open Forest Manager Dave Morris explains: "We tend to use the 'historic' method of hand pulling during the summer months. We have done a small trial with herbicides, but our policy is to avoid chemicals if possible."

Dave comments that ragwort is not a problem year-on-year but some years, such as 2012, the workload is considerable.

"We draft in labour for a period of six weeks to hand pull the ragwort, using teams of contractors, volunteer rangers and our own staff."
Although the open forest totals 18,000ha, Dave explains that ragwort tends to grow in specific habitats, such as old airfelds or the edge of roads, and is not prevalent on the open heath.

"We target our resources to pull and bag the ragwort, which is then collected and taken to specific disposal points for composting, where there is no likelihood of livestock encountering the dying plants. We avoid burning as the fire risk is already high at that time of year." He adds that, by pulling the ragwort before heading takes place, there is no risk of seeds blowing and reinfesting the forest.

"I would say that we are on top of the ragwort, and have controlled its spread, but there are no plans for eradication. We recognise that there are some species, such as the cinnabar moth, that use ragwort, and we have a policy to leave any plants that have the caterpillars on them."

Dave points out that there is increasing pressure from environmental groups to preserve ragwort, and that it is a delicate balance between maintaining habitats and avoiding infestation where ponies and cattle graze.

"The New Forest is an SSSI, so we have clear guidance on habitats from Natural England and accept the need for management," he concludes.