STM/SCAG is still the top choice at Northampton Borough Council 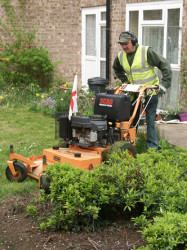 Just as Spring finally kicked off and the grass started to grow, Northampton Borough Council took delivery of 24 SCAG machines from Simon Tullett Machinery, so we visited the council to find out just why these machines are so appealing. 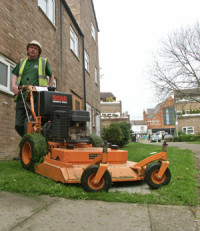 Paul Chambers, Street and Environment Team Leader, explained that the 32" and 36" pedestrian mowers had been taken on to replace existing SCAG machines which they have had for a number of years. He and his team had spent 3 months researching what was available and attending demonstrations, and made the decision to stick with SCAG.

"It was the staff choice to stay with SCAG" Paul commented. It seems the staff at the sharp end like the machines and as they spend about 6 hours a day working with them, that's some recommendation. Paul and his team look after the maintenance of the parks, cemeteries, housing and highways in the Northampton Borough Council area. The machines are ideal for negotiating the narrow gateways and accesses that the team come across on their rounds. They are also easily transported to all parts of the town using closed vehicles for security reasons.

Martin Gamble, the chargehand on one of Paul's teams, took us out to Exeter Place to see the machines in action. He has organised a mowing round that the team are able to complete in a couple of weeks, thanks to the flexibility of the SCAG machines.

The bulk order of contract hire machines was organised by Steve Rossin at Arthur Ibbetts, in conjunction with Peter Morgan at STM. At the same time the council also purchased a Sabre Tooth Tiger with a Humus head which they use for scrub clearance. With such a comprehensive range of machinery, it appears that Paul and his team are well set up to tackle the growing season ahead.