1 Stockport County - not too bad! 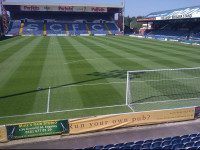 In April, we had our renovation planned and signed off to be started on Sunday 5th May. We planned to koro off the top 15mm, add 100 tonnes of Fibresand, cultivate, prepare for seeding and apply pre-seed and twenty bags of seed. However, as soon as we were relegated, we had to cancel all plans and come up with a much scaled down renovation.

We used a local contractor and work was completed on 11th May. We heavily scarified the pitch, added sixty tonnes of rootzone, vertidrained, seeded with twenty bags of MM60 seed and applied sixteen bags of Marathon sport pre-seed.

Thirteen days later, I applied fourteen more bags of pre-seed and, after seventeen days, cut the pitch for the first time. From then on I was cutting the pitch every other day. 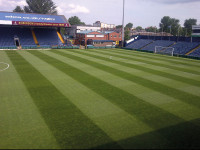 We are having to tackle the issue of Poa which is visible in patches, partly down to the fact we didn't manage to koro off the surface.

Throughout June we have been hit with leafspot, which I have managed to spray off; not once, but twice. We spotted it fairly quickly, but its far from ideal!

Into July and I'd cut the pitch pretty much six days a week. Our first game was on the 9th July, eight and a half weeks after seeding.

I put down a 16:4:8 on 3rd July, which helped the pitch come on in preparation for the first game. In the build up to the game, I was pleased with how the pitch was coming on and I was cutting twice a day before marking out and keeping the water on close to kick off time.

We then had another two weeks until we had four games in the space of ten days, which included friendlies and testimonials. The pitch entered that period in good condition and came out the other side well. It was a good test for the new seed and I was pleased to get through those games relatively unscathed. 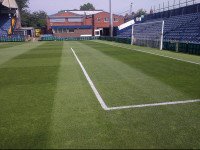 Overall, I'm happy with the pitch at the moment, although its not been easy and, at one stage, it didn't look like we would be able to carry out any renovation at all yet, eight and a half weeks later, we had a pitch that was up to scratch and ready.

There's been a lot of work done since then which has improved the pitch further and maintained the sward and overall quality of the surface, and I'm confident the pitch will enter the winter months in a good condition. There's been a lot of pressure put on the lone Dennis G860 as I have been cutting most days but, at the moment, I've managed to keep on top of things.

Since our first game on 9th July we've had seven games [at the time of writing this in early September]. The pitch has played well and I've tried to present it as well as I can by keeping on top of the fertiliser programme I have, repairing the pitch after games and cutting the pitch nice and clean in the build up to a game and on the day of the match.

I've also had the pitch verti-drained again and run the Procore over the surface twice. I've managed to have two nice new sprinkler heads fitted which have helped with watering overnight and making sure the pitch gets an even coverage of water, and stopped me from using the hosepipe!
It's been my first renovation on my own and it has been a tough test, but I can't argue with the condition of the pitch considering the equipment I have at my disposal and limited resources. 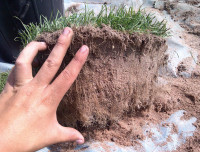 I've worked closely with our suppliers who have been great, helping me with my budgets and that's been a challenge in itself, providing the right fertilisers and chemicals for the money the club are willing to pay. And, as I say, I'm happy to have got through my first renovation with a pitch that isn't too bad!

The skills and techniques I have learnt since starting out as a groundsman five and a half years ago, at three different clubs, has given me the opportunity to take on the challenge here at Stockport and, as much as it is hard work being alone, and a lot of hours are spent walking behind my mower, I'm enjoying every minute of it, especially when the team win on a Saturday.

Going into winter will again be challenging for all groundstaff up and down the country, and it's no different here with the removal of frost covers daily, the inevitable snow fall and temperatures rarely getting above zero, even in the day.

We have some very early signs of it creeping in here as we have a 15-20m strip right down one side of the pitch which doesn't see any sunlight in the winter, and it's a challenge in itself keeping the frost out of that area come November time. We manage to get the new seed through in the growing months (albeit a little slower than other areas) as obviously temperatures are higher and it's much easier growing grass.

Although we cannot afford the luxury of lighting rigs, what we have going into November is mostly what were left with once February/March time arrives, so it's vital that, in these growing months, I try and get the pitch in the best possible condition to hopefully avoid any major problems in the winter, other than maybe some crazy cold weather which none of us can do anything about!

Hopefully, this winter will be kind to all of us, although I'm sure there will still be a few sleepless nights!