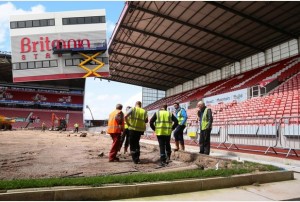 In the intervening years, the Potters have been down to the third tier and up to the top flight - and seen the demise of their loyal old sponsor, the Britannia Building Society.

The venue is being rebranded as the bet365 Stadium - and the club are taking the opportunity to tidy up and reinforce the structure before putting the new sign in place.

Five thousands seats are being replaced too in the DPD Stand, shipped in from Germany with reinforced back rests to apparently prevent snapping.

Chief executive Tony Scholes said: "The stadium signs with Britannia have been taken out now and they will be replaced with the new branding for the bet365 Stadium. We're well on with replacing the old seats which spelled out 'Britannia'.

"We're clearing up the whole stadium. We're rebranding everything but we're giving the place a facelift as well.

"There's a lot of work being done and every day is a hive of activity."

The biggest project at the stadium this summer, however, is on the pitch.

The turf was pulled up on the morning after Andy Wilkinson's testimonial match last month and is being replaced by a hybrid synthetic playing surface ready for the 2016/17 season.

The same work is being done on two pitches at the Clayton Wood training complex, costing the best part of £5m in all.

Scholes added: "The pitch is coming on well. The new drainage is in, the new undersoil heating is in and the gravel is there to assist that. We're laying sand on it now before we put the fibre root zone in.

"It's a lot of work because it's a big, big construction.

"We started work on one of the two down at the training ground ahead of that and that's probably playable. The other one is a bit behind."

Stoke are doing maintenance work on the concourse areas too as they try to make life better for everyone; fans, players and television audience as well as targets Mark Hughes is trying to woo.

"The support coming along is the key," said Scholes.

"We are going to fill the stadium every match next season and we've got to have the right environment.

"It's important the quality of the pitch is as good as it can be because the players we want to attract expect the best facilities both in terms of a match day and down at the training ground.

"The pitch has to be the best it can be for television viewing as well because we all turn on the telly and expect to see pitches in crisp condition, matching the quality of the football being played on them."

For the orginal article, visit www.stokesentinel.co.uk.