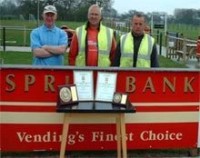 (Head Groundsman, Regional Groundsman of the Year, level 4 and below, and National Finalist for the last two years).

From there they moved in to a local Lads and Dads league, which only had three teams at the time, so they applied to the much bigger Newcastle under Lyme league. Initially, they had some difficulty being admitted because they were from outside the area. Eventually, they were accepted, and then progressed to the Lichfield league.

Today we now have eighteen teams from under 8's to open age, three girls' teams at under 12's, under 14's and under 16's, plus a ladies team. The reserves play in the Springbank League and the first team are in the North West Counties Division 1 after gaining promotion last season. On this site we maintain 35½ acres, comprising of 3 full size pitches, a junior pitch and 3 mini football pitches. We also have a 10-year lease on the Springbank stadium, King's Park, Meir Heath. The first team use this venue as their home ground and we maintain the pitch at the Springbank Stadium as well. 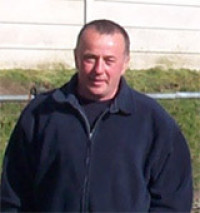 th May. There was a slight delay following our last league match because we had to stage 2 local cup finals. These are very important to us because they bring in revenue for the club.

Our close season work this season began with scarifying. We hired in a Richard Long scarifier and really gave the pitches a thorough going over; it's surprising to see how much rubbish accumulates during a single season of play. Then we verti-drained using a Wiedenmann terra spike to alleviate the compaction.

The playing surfaces undulate in places so we hand levelled with topsoil some of the worst areas, followed by seeding using a Charterhouse disc seeder and top dressing with the remainder of topsoil. In total we used about 400 tonnes of topsoil, 42 bags of seed and 60 bags of 6:9:6 fertiliser on all of the pitches including the stadium. Some of the areas, where we had taken out

Top dressing was a 70:30 root zone mix supplied by Turfmech. We were disappointed with the dressing we used last year; it was too sandy so we went for this mix this time around. The soil structure is mainly derived from sandstone, and previously the site was agricultural, with crops growing on the site before we came here.

Our work at the moment consists of tidying up the site, painting etc. We did our first cut on 16th June and have carried on with regular mowing since then. We have major rabbit problems on the site, so we have a lot of work filling in holes. We did have a mole and we took up every other flag on the pathway surrounding a pitch to find it, and then as if by luck, found it dead on the third pitch.

At the moment we're preparing for the 19th July when we have our first friendly here. In total we've got eight friendlies before the season kicks off, with Cheshunt (out of the Ryman League) being the biggest match.

In previous seasons we have vertidrained twice per season, but I am hoping to do it five to six times this year. With the amount of games played here, it quickly becomes compacted.

During the season we will be staging about fourteen games each weekend, plus one at the stadium. Apparently, in this higher division we will be having more midweek games at the stadium as well. We will be spending more time there, which obviously means that this site will have to suffer a little.

The machinery we use includes a Jacobsen Tri King, two 36-inch Ransomes Mastiffs, a ride-on rotary, a Sisis slitter, a 48 inch rotary and a couple of Flymo's. We also have a trailer for taking machinery to the other site, and a sponsored van. On my list of machinery we would like to bring in are a 38hp Iseki tractor, a bigger slitter and a gang mower. At the moment, what we don't have we hire in.

The club also has some very impressive development plans including a new clubhouse at the main Youth Development Ground - Springbank Park, a mini stadium, floodlights and more drainage. In total we are talking about a £1 million scheme, which we hope will attract some grant funding. So far, the Chairman has invested about £750,000 of his own money. He has been fantastic in underwriting the club, but there comes a time when we have to become self-sufficient.

Over the last five years the team has gone from strength to strength. And there is no doubt that one of the reasons for our success is because we can attract good players, due to the quality of the facilities that the club provides.