by Chris McCullough
in Rugby, Cricket, and Football
on 16 Apr 2016 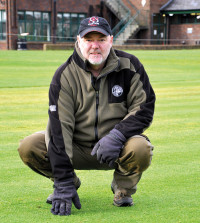 For the past twenty-three years, Keith Berry has been caring for the sports fields at a rather unique complex in a leafy suburb of south Belfast, and he has enjoyed every moment of it.

He is the current grounds manager at the Newforge Country Club, which is home to the Athletic Association for the police in Northern Ireland.

It's a private members club for serving, retired and associate police officers as well as non-police who wish to become members.

As the sole carer for the grounds, Keith's timetable is always hectic as he tries to keep the pitches in good order for the next game.

It's a real labour of love for the former site worker who came into the industry more by chance than by intention. However, his passion and drive for Newforge Country Club is well illustrated in his determination to succeed.

Keith said: "I worked in various stores since I left school, including builders merchants, steel suppliers, an electrical supply business and I spent a time working on building sites. I really always wanted to work outdoors, but it often proved very difficult to get outdoor work without experience, so I signed up to a job training programme on a youth scheme."

"It wasn't long before I was offered a twelve month training position at Newforge Country Club. I had no real interest in sports or horticulture but, as jobs working outdoors were thin on the ground, I quickly took up the place to see what was ahead of me."

The RUC Athletic Club was formed in June 1928 by Captain TD Morrison to foster approved sporting activities for members of the force. It is affiliated to and operates in close liaison with Police Sport UK of Great Britain.

Paralleling the development of the sports was the development of a highly talented athletics team which, in 1950, held or shared nine Northern Ireland records. At the same time, great athletes emerged, led by shot-putter Davy Davidson, 440 runner Billy Dundas and future Olympic champion Mary Peters.

After Keith's year placement had ended, he was fortunate enough to have been offered a job at Newforge, which he duly accepted.

It took time but, eventually, Keith began to enjoy the job at Newforge and learned a lot from former staff members and various training courses.

He said: "I took levels 1, 2 and 3 in amenity horticulture as well as sports turf maintenance over a five year period, which included all my pesticide application certificates namely PA1, PA2 and PA6a."

"I also completed levels 1 and 2 in training and development for cricket groundsmen. I also have a NEBOSH occupational health and safety qualification, as well as various COSHH certificates in fire and manual handling, etc."

"There wasn't really any one person who inspired me, but I did have an excellent working relationship with my original head of department and grounds manager at the time, Stephen McNally. His idea of training was to throw me in at the deep end and let me get on with it. We still keep in touch to this day."

Outside, on the fields, Keith submits a cost running budget to his superior each year and tries to keep to it. However, over the years, staff numbers have been depleted and now Keith is on his own making the job all that bit tougher.

"At one time, there were two grounds staff and the grounds manager, plus a part time guy who worked Mondays and Fridays. There is only myself now, full time," he said.

"I do all my own work on the pitches with the exception of sand dressing. A contractor is employed to carry that out, along with hollow coring and sand dressing on the bowling green. There is also a guy who does part time maintenance who helps me out from time to time if I am really under pressure." 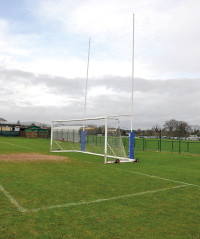 "All the pitches on site are sand carpet. They were constructed well over thirty years ago, but I am not sure exactly when."

"Clippings have always been reintroduced, so a layer of organic material or soil has built up on top of the sand which is now around 50 to 60mm soil on top of sand."

"It has been a very wet season here, particularly at the end of last year and into this year, which has meant I have had a lot of verti-draining to carry out." There is no fancy equipment here like undersoil heating or covers to help. It's just the over twenty year old tractor and the Wiedenmann Terra Spike."

The pitches are used by the PSNI (Police Service of Northern Ireland) teams and are also hired out to community teams and other sporting organisations.

Keith said: "The grounds consist of one dedicated football pitch and one rugby pitch which are also used for Gaelic football, American football and baseball. There is also a dual purpose pitch for football and rugby, a grass area that used to be a hockey pitch but is now used for training and five a side, a gravel hockey pitch that is no longer in use, a cricket square and a bowling green."

"The grounds sit on an elevated open site, so we pretty much endure the best and the worst conditions that the weather can throw at us. The prolonged periods of rain, followed by the periods of severe drought we have been experiencing over the last few years, are the most disruptive to us."

"In order to cope with these weather conditions, I have to be careful how I manage the pitch use, and by administering mechanical relief in wet weather."

"I do not have a sophisticated irrigation system, so I have to use what is at my disposal the best I can. My only means of irrigation are two extremely old rain train sprinklers that don't work properly as the water pressure on the site is not high enough to propel them!"

Presentation of the grounds rates very highly with Keith, but there are not enough hours in the day to allow him to do all the tasks he wants to with only himself working there.

He tries to maintain the rugby and football fields to around twenty-four millimetres, with the cricket square and bowling green cut 'somewhat shorter'.

Newforge Country Club is a busy place during the three main seasons, but there is also work to do in the winter time, as Keith spends his days repairing the damage from the previous night's games or training. 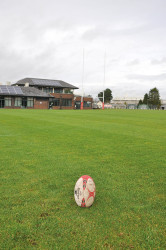 As well as repair work, he overseeds the pitches and arranges for the sand dressing to be completed. "Everything is affected by budgets in the current economic climate," he said. "I have very much adjusted my approach and the products I use in an attempt to keep costs down, but I have to say I have always been permitted to spend on anything I have asked for."

"With finances so tight at the moment, there is a need to raise revenue for the club. This has meant that we have had to open our doors to more outside organisations who mostly require training facilities all year round. Ulster Rugby Academy, for instance, use most of the grounds for training practically all day, every day of the week throughout the summer."

"However, as you can imagine, with groups that can sometimes number seventy or more young men, all wearing studded boots, using the grounds at a time when pitches are traditionally rested to allow regeneration, it can lead to a lot of frustration."

"Back when I started, I used to take regular soil samples to ascertain exactly what the grounds needed, but I have been here so long now I pretty much know what my turf requires."

There is not a huge portfolio of machinery available to the club, so buying new machinery is not a regular occurrence at all. Any piece of kit that has been acquired in the past has been purchased second hand from dealers. 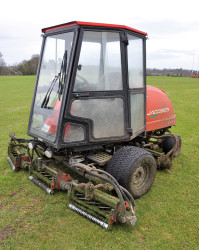 "There is not any real brand loyalty here. We buy when we need it and wherever we can achieve the best deal. The Kubota tractor was purchased over fifteen years ago by me and was a few years old at that time. However, the Terra Spike was bought, also secondhand, but has proved to be an extremely vital piece of equipment around here."

"We also managed to buy a Jacobsen four wheel drive mower which has also been a real help. It was bought, also a few years ago, as a demonstrator model which represented a huge saving to the club."

"If I could have one wish around here it would be that the entire fleet of machinery would be updated and modernised, with the addition of a small tractor and a ride on rotary cutter."

When it comes to pests and diseases, Keith tries to keep the them at bay by spraying pesticides and herbicides. But there is one pest that is presenting a huge problem to Keith, which he is finding tough to manage.

"We don't have any real outbreaks of disease here, not really, just the odd outbreak of fusarian patch on the bowling green, and some of the lesser diseases on the pitches, like red thread or snow mould, but nothing to get concerned about."

"Moss on the bowling green has become an increasingly major problem ever since moss killing chemicals were taken off the market. With the heavy rain these past few months, the moss is appearing elsewhere too, but I am trying to keep on top of it.

"Chafer grubs, worms and leatherjackets were treated annually and did not really pose a problem. But, now, my main enemy on this site is crows. During the winter, we have one of the largest colonies of crows in Northern Ireland roosting in the mature beech woodland that is right next door to us. They like to feed just before they sleep and again when they wake up. When you consider there are thousands of these things surrounding us, I am sure you can imagine the incredible damage they cause."

"They swoop down and dig up the pitches in the search of leatherjackets and other critters that might pass as a meal. I am never done repairing the damage they cause. We also have a group of hooded crows that reside in the area year round and they too can be quite destructive as well."

"Spraying for grubs used to help a bit with the crow problem, as it reduced their ready made dinners. I have tried everything to try and control the crow damage, but the only thing I have found that works is to move them on each evening with quite a powerful laser pen just as it is getting dark!"

"I have tried using a falcon to scare them. The crows do keep their distance from the falcon, but they just keep on flying around until the falcon has gone, making the exercise pointless in the end."

"We don't have any flora or fauna within the complex, although I do consider the surrounding parkland and nearby River Lagan when carrying out any activity which has the potential to cause harm."

When considering the groundcare industry, Keith has his own ideas of how people perceive groundsmen and what tasks they actually do.

Even though he has not got the time to consider being involved with any groundcare organisations, he did wish to say the job is highly undervalued. "I think, on the whole, we are undervalued, although I think it is out of ignorance. Employers and the general public, who have little understanding of our industry, do not always appreciate the value of the knowledge, experience and dedication that we put into our work."