by External source
in Public Places
on 06 Sep 2014

0 Stonehenge WAS completely round

Historians have long debated if the outer ring of the prehistoric stones was at one time a complete circle, but countless archaeologists have failed to find any evidence - despite numerous tests and excavations. When stewards went out to water the grounds, the length of the hosepipe meant one area was left dry. This left the ground parched and revealed where stones that have been missing could have been in place. Tim Daw spotted the patches on the ground - now thought to be 'stone holes' - where the grass was parched. 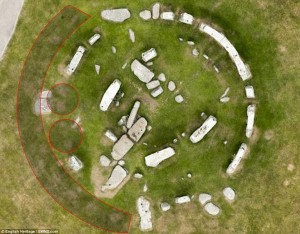 Every summer stewards at the ancient monument in Wiltshire water the site to keep the grass healthy and green and the earth well nourished. But this year the hosepipe was not log enough and failed to reach the outer part of the circle - where no stones stand.
The dried out land, which couldn't be reached, revealed marks of parched grass which were spotted by a volunteer who alerted experts.

English Heritage believe the discovery has finally revealed the location of missing sarsen stones which once completed the Neolithic circle. Susan Greaney, from English Heritage, said: 'It's really significant, and it shows us just how much we still have to learn about Stonehenge.'A lot of people assume we've excavated the entire site and everything we're ever going to know about the monument is known. But actually there's quite a lot we still don't know and there's quite a lot that can be discovered just through non-excavation methods. 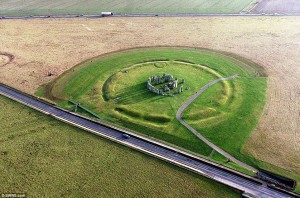 'It's great that people who know the site really well and look at it every day were able to spot these parch marks and recognise them for what they were. We maintain the grass with watering when it's very dry in the summer, but our hosepipe doesn't reach to the other side of the stone circle.

'If we'd had a longer hosepipe we might not have been able to see them.'

Historians have long wondered whether Stonehenge was an intentionally-incomplete circle, but countless high resolution geophysical surveys and excavations have failed to give the answer. Staff only water the site during the driest weeks of summer, but the hosepipe doesn't reach to the south-west quadrant where there is a gap in the circle.

Worker Tim Daw spotted the patches on the ground - now thought to be 'stone holes' - where the grass was more parched.